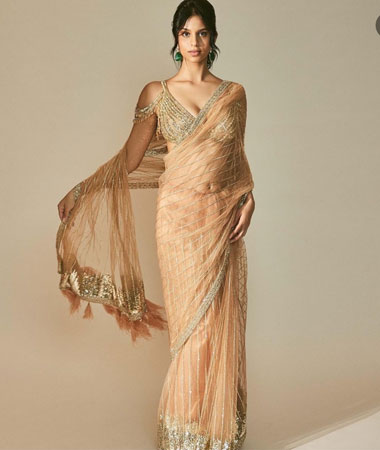 Shah Rukh Khan and Gauri Khan’s daughter Suhana Khan shared a glimpse of her last day of 2022. She spent the last evening, catching up with her younger brother AbRam.

They were on a beach.

Suhana posted some pictures with AbRam on her Instagram Stories. In them, their silhouettes were seen with the setting sun in the background. AbRam appeared to be running towards Suhana for a warm hug. Sharing them, Suhana ditched caption and added only a black heart emoji.

Earlier this week, Suhana was spotted partying in Dubai. She was joined by Karan Johar, mother Gauri Khan and others. Fan pages also reshared some party pictures, which are appeared to be clicked at Alibaug, where Shah Rukh Khan owns a lavish bungalow. On Christmas, Suhana attended the Kapoor family lunch in Mumbai with her The Archies co-star Agastya Nanda as well as his sister Navya Naveli Nanda and their mother Shweta Bachchan. Suhana and Agastya twinned in black outfits, while Navya and Shweta opted for white outfits. Suhana and Agastya are going to make their acting debut next year with Zoya Akhtar’s Netflix film, The Archies. It also has producer Boney Kapoor and late Sridevi’s daughter Khushi Kapoor.

Suhana is daughter of actor Shah Rukh Khan and interior decorator Gauri Khan. She is their second child and has an elder brother, Aryan Khan. While her younger brother AbRam is in school, A

ryan recently launched his business venture. He is also working on his first Bollywood film as a writer.

The Archies also stars Mihir Ahuja, Dot, Yuvraj Menda and Vedang Raina. It is the Hindi adaptation of the famous American comic book series, set against the background of the Anglo-Indian community in the 60s. It is produced by Zoya and her longtime collaborator Reema Kagti under their production house Tiger Baby, Graphic India and Archie Comics.