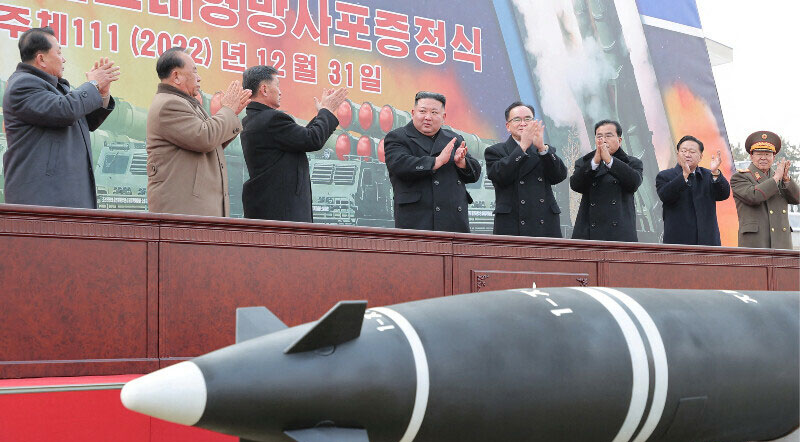 In a report at the end of a key party meeting in Pyongyang, Kim said the country must “overwhelmingly beef up the military muscle” in 2023 in response to what it called US and South Korean hostility, the official KCNA reported.

Claiming that Washington and Seoul were set on “isolating and stifling” the North, Kim said his country would focus on the “mass-producing of tactical nuclear weapons” and develop “another ICBM (intercontinental ballistic missile) system whose main mission is quick nuclear counterstrike”.

Such goals form the “main orientation” of the 2023 nuclear and defence strategy, the report said.

Military tensions on the Korean peninsula rose sharply in 2022 as the North conducted sanctions-busting weapons tests nearly every month, including firing its most advanced ICBM ever.

It capped the record-breaking year of launches by firing three short-range ballistic missiles early Saturday, and conducting another rare late-night launch at 2:50 am (1750 GMT Saturday) on Sunday, Seoul’s military said.

The official KCNA reported Sunday that the launches had been “a test-fire of the super-large multiple rocket launchers”.

In a separate KCNA report, Kim said the weapons put South Korea “as a whole within the range of strike and (were) capable of carrying (a) tactical nuclear warhead”.

“North Korea is signalling a tactical shift of indirectly pressuring the United States by pressuring South Korea and escalating tensions on the Korean peninsula starting this year.”

Seoul’s defence ministry called North Korea’s latest threats “provocative rhetoric that seriously damages the peace and stability on the Korean peninsula” and urged Pyongyang to immediately give up its nuclear programmes.

“We sternly warn that if North Korea attempts to use nuclear weapons, the Kim Jong Un regime will face an end,” the ministry added in a statement.

The launches come just days after Seoul scrambled fighter jets as five North Korean drones made an incursion into the South’s airspace Monday.