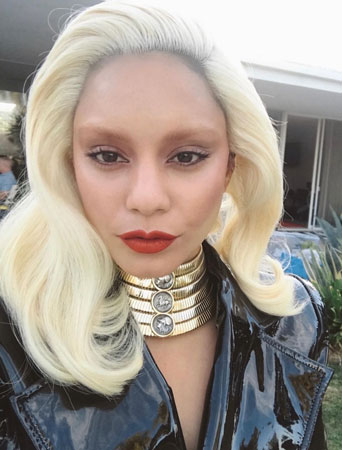 The actress, known for her signature brunette tresses, shocked fans when she revealed her epic hair transformation Dec. 13. In a selfie captioned, “Who even is she,” Vanessa debuted a short blonde ‘do and bleached eyebrows.

For many, the answer was… Lady Gaga?

“When your obsession as a teen was Vanessa Hudgens and Lady Gaga, and now Vanessa decided to dress up as Lady Gaga,” one user commented. Added another, “She’s giving Lady Gaga for sure!” A third, in reference to Gaga’s 2013 song, “Venus,” simply wrote, “Take me to your leader.”

It’s worth noting this isn’t the first time that Vanessa has debuted a new hairdo, with the singer chopping her tresses for her role in the 2013 film, Gimme Shelter. As for the haircut itself, she actually took matters into her own hands, literally.

“In the movie, my character cuts her hair,” she told Access Hollywood in 2014. “And we were cutting it and it didn’t look like it was cut, like I was cutting it myself, so I grabbed the scissors and started cutting my actual hair.”

But the High School Musical alum isn’t the only celeb who has us going gaga over their new look.