Shakira spends first Christmas without Gerard Pique with her children 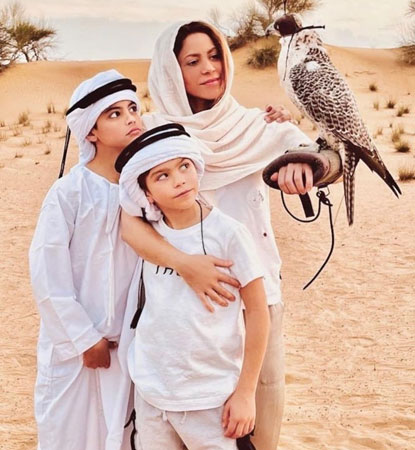 Shakira took her kids to Dubai to celebrate her first Christmas without ex-boyfriend Gerard Pique. The Waka Waka hitmaker took to Instagram to share a glimpse of her holiday with her boys, Sasha and Milan, with her 77.9 million followers. In the picture, Shakira could be seen with a scarf over her head while a large bird sat on her hand. The snap also featured her sons, who were dressed in traditional Arabic outfits with white shemaghs on their heads.
“In the desert this Christmas, searching for serenity,” the Columbian singer captioned the post.
This is the first Christmas Shakira celebrated without Pique with whom she parted ways in June this year without disclosing the reason behind their shocking separation.
Shakria and Pique later signed kids’ custody agreement, according to which the couple’s kids will move with their mother to Miami after New Year. As per Marca Magazine, Shakira will drop her sons to Pique’s house so they would celebrate New Year with him after their Dubai holiday.