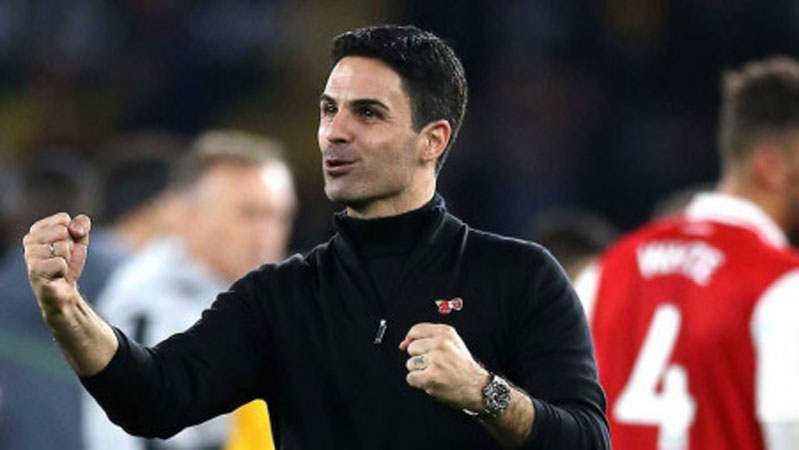 LONDON: Mikel Arteta has urged leaders Arsenal to carry on from where they left off by winning their first Premier League title since 2004 when English football’s top-flight resumes after the World Cup break.

The Gunners were in superb form, with 12 wins from 14 matches, when the league was paused in unprecedented fashion to allow for the first World Cup held in a northern hemisphere winter to take place in Qatar.

All season long, fans and pundits have been debating whether the break will be a help or a hindrance to clubs’ ambitions, with Arsenal now without Gabriel Jesus after he was sent home early from the World Cup with a knee problem sustained in Brazil’s shock defeat by Cameroon.

Arteta, however, was in buoyant mood ahead of his side’s return to Premier League action against London rivals West Ham at the Emirates on Monday.

“You know, I want the team to play a certain way, and the more consistent we are on that the more we are going to win,” he told Sky Sports.

City will be the last of the title contenders in action during the Boxing Day holiday round of fixtures when they travel to strugglers Leeds on Wednesday. Saudi-backed Newcastle, riding high in third place, are away to Leicester on Monday.

The Magpies last won a major domestic trophy in 1955 and such is the northeast club’s desire to end that drought, Howe used all five of his players who had been in Qatar during a hard-fought 1-0 win over Premier League rivals Bournemouth that secured a place in the last eight of the League Cup.

United, given their status, may be under most pressure to achieve a top-four finish, although manager Erik ten Hag said: “I think also for the manager of Chelsea (Graham Potter), of Newcastle (Eddie Howe), all those clubs invest a lot in their squad. So for every manager it’s a big pressure to get into the Champions League, that’s clear.”

Tottenham travel to Brentford with manager Antonio Conte confident Harry Kane will have put his World Cup heartache behind him.

Kane’s missed penalty late on against Spurs team-mate Hugo Lloris was a key moment in England’s 2-1 quarter-final loss to France.

“No, honestly (I am not worried) because we’re talking about a world class striker,” Conte said. Liverpool will try to kickstart their season again away to Aston Villa on Monday.

Bottom of the table Wolves begin their quest for top-flight survival under new manager Julen Lopetegui when the former Spain and Real Madrid coach, who oversaw a midweek League Cup win over Gillingham, makes his Premier League debut away to Everton.

“For me, the only aim in front is the next match,” said Lopetegui, who replaced the sacked Bruno Lage.

Fulham’s match against Crystal Palace on Monday will be their first game since the death of club great and England 1966 World Cup-winner George Cohen at the age of 83.

Premier League chiefs announced there will be a moment’s applause before all top-flight matches between Boxing Day and December 28 in honour of Cohen, with all players and officials wearing black armbands as a mark of respect.