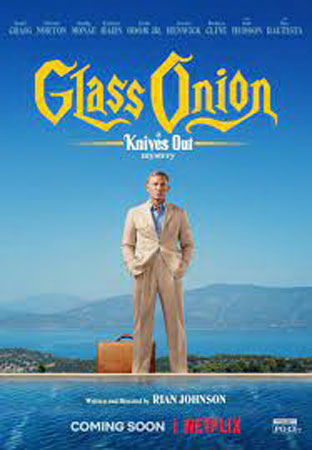 The rich are richer in Glass Onion, the effervescent sequel to Knives Out that just had its premiere at the Toronto International Film Festival, and arguably more awful – or, at least, awful in grander and more visible ways. While Rian Johnson’s 2019 whodunit focused on the stunted relatives of a famed novelist, people who at least put up some pretense of respectability, his new one turns its attention to a group of “disruptors” who are prominent enough to practice their respective grifts right out in the open. Claire Debella is the governor of Connecticut and an aspiring senator who talks tough on CNN while quietly approving untested tech in exchange for donor money. Lionel Toussaint is head scientist at the company, Alpha, that’s responsible for that untested tech, and has rushed timelines and skipped safety procedures at the behest of his boss. Birdie Jay is a media personality turned sweatband brand owner who’s so prone to viral scandals that her assistant, Peg, is the keeper of her phone.