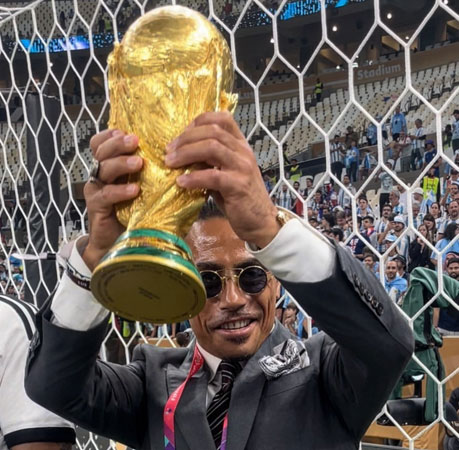 Celebrity chef and social media meme Nusret Gokce – better known as “Salt Bae” – has turned his singular way of seasoning a steak into global fame and outsized wealth. The 39-year-old Turkish fitness fanatic first gained renown a decade ago with YouTube videos showing him pouring salt on a cut of meat down his bare arm with an overtly sexual pout.

His 50 million Instagram followers can now see him posing in his trademark dark glasses and slicked back hair with the FIFA World Cup and some Argentinian football stars. How Salt Bae actually got to touch the golden trophy after Argentina s win over France is the focus of a formal FIFA probe.

Viral social media images show the diminutive chef trying to fight his way through a swarm of security personnel towards Argentina s captain Lionel Messi on the pitch after the match.

One clip shows Messi seemingly brushing away Salt Bae and attempting to walk away.

But a picture subsequently posted on Salt Bae s Instagram account shows him clasping Messi’s hand and gesturing triumphantly towards the camera.

“You re the man, Messi,” Salt Bae wrote next to the photograph in Turkish.

The picture included the hashtag #saltlife.

That life is being chronicled by smartly-dressed social media assistants that Salt Bae hires to follow him around and record his every step.

The chef generally does not speak.

He occasionally growls a satisfied but barely distinguishable word following a long night that he crowns with a cigar puffed after performing a few acrobatic tricks with a golden lighter.

His juggling acts with a razor-sharp knife and huge slabs of very expensive meat made his career – launched in a lowly butcher shop on the Asian side of Istanbul.

Salt Bae told AFP in 2020 that he still views the Turkish megalopolis as the “capital of the world”.

But he now heads a global chain stretching from Las Vegas to London that serve $1,000 gold leaf steaks to a clientele made up of fellow trendsetters and celebrities.

Salt Bae can still occasionally be seen jogging around Istanbul s more upscale neighbourhoods with impressive weights strapped around his bulging calves and arms. His attention to his own physique is part of the chef s peculiar charm.

His early morning workouts are chronicled in great detail and include endless flexes of his biceps for the camera. But this self-aggrandisement is laced with boundless irony that shines through when he happily posts some of the most scathing reviews of his food and general behaviour. Critics have roundly panned his London Nusr-Et outpost – one of 22 he now has around the world. The Guardian s food critic called it “a ludicrous restaurant”. GQ magazine agreed that the steak Salt Bae serves in New York is “mundane, somewhat tough and rather bland”. “It does not matter,” GQ added. “One does not visit Salt Bae for steak alone any more than one goes to Mass for the wafers.” Salt Bae happily gloats at all the attention while accumulating a fortune that various media reports estimate at up to $70 million.

“All publicity is good publicity,” he wrote on Instagram over a picture of one of the more painful London reviews.