* During the meeting, important decisions were taken to promote and develop language, culture, civilisation and cultural values 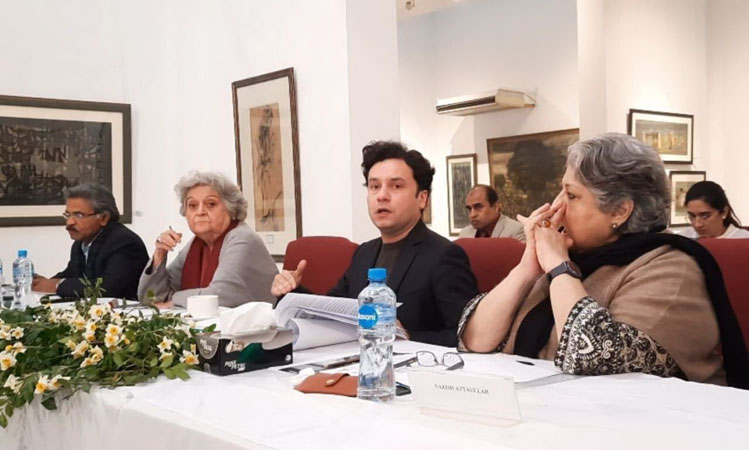 The 70th meeting of the Board of Governors of Lahore Arts Council was held at Alhamra Cultural Complex, Gaddafi Stadium. Chairman Board of Governors Alhamra Razi Ahmed presided over the meeting, and the Executive Director of Alhamra Zulfiqar Ali Zulfi started Board meeting as Secretary.

During the meeting, important decisions were taken to promote and develop language, culture, civilisation and cultural values. The meeting decided to use Alhamra Art Museum for exhibitions. It was agreed that in March 2023, renowned artist Imran Qureshi would exhibit his work at Alhamra Art Museum next year.

On occasion, Chairman Alhamra Razi Ahmad said that the welfare of Alhamra employees is a part of our priorities. The board is taking different steps to facilitate the employees for their prosperity. Apart from this, Razi Ahmad said that since the last meeting, significant efforts had been taken to make the environment of Alhamra Arts Council more attractive, and this process will continue with more enthusiasm. Ahmed further said that the New Year is bringing International Literary and Cultural Festivals for which the preparations are in full swing.

During the meeting, Executive Director Alhamra Zulfiqar Ali Zulfi told the board that buying new paintings for Alhamra Art Museum is the urgent need of the hour. Zulfi said that Alhamra is determined to perform well in the New Year.

The heads of different committees briefed the board on various issues and the board members informed the meeting of their valuable opinions, which will be part of the future action plan.