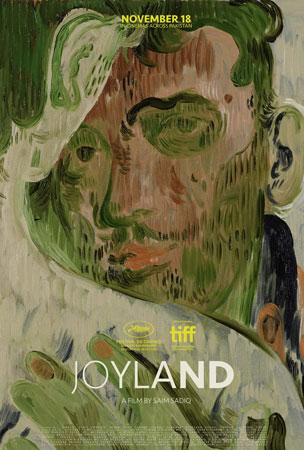 Yet another milestone has been achieved by Pakistan’s debut Cannes feature ‘Joyland’ – bagging a nomination at the prestigious Oscars.

After successfully making waves at the acclaimed Cannes Film Festival earlier this year, the young director Saim Sadiq with his latest feature ‘Joyland’ continues to make the nation proud with the achievement streak.

Adding to the haul, the Cannes winner got nominated in the category of International Feature Film, making it Pakistan’s first submission for a feature film at the Academy Awards.

It is pertinent to mention that ‘Joyland’ had won the ‘jury prize’ in the ‘Un Certain Regard’ category at the Cannes Film festival as well as the ‘Queer Palm’ award. The title triumphed over 13 other nominees to pick up the coveted prize, while it also received a 10-minute-long standing ovation from the festival attendees after the premiere. Moreover, Joyland also brought home the award for ‘Best Film from The Subcontinent’ at the 13th edition of ‘Indian Film Festival of Melbourne’, held in Australia last month.

“I am so, so happy for you and your whole team. Everyone who was on the screen, behind the screen. You guys have done such a tremendous job! It’s a huge honour for me to be a part of this project. It is such an amazing moment for all the artists and for Pakistan,” said Malala. “The team must know everyone’s so proud of them,” she added. Sadiq responded, “Thank you for your work, for playing such an important role. It makes me really proud as well. We make a good team.”

The complete and final list of Oscar nominees is set to be announced on January 24, next year.