Pakistan in touch with Afghanistan over terrorism resurgence: FO

* Spokesperson says protection of civilians is responsibility of both sides 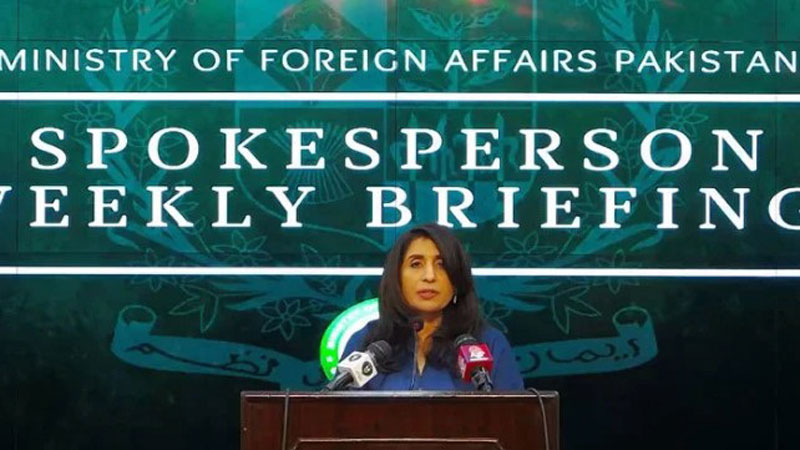 Pakistan is in constant touch with the interim government of Afghanistan regarding the resurgence of terrorist incidents and cross-border violence, the Foreign Office said Thursday.

“We have agreed to continue established institutional mechanism with Afghanistan to prevent such incidents,” Foreign Office spokesperson Mumtaz Zahra Baloch said at a weekly press briefing, in response to a question on the clashes between the security forces of Pakistan and Afghanistan in Chaman-Spin Boldak area.

The spokesperson said Pakistan had reiterated to the Afghan authorities that the protection of civilians was the responsibility of both sides. “Pakistan remains committed to maintaining its fraternal relations with Afghanistan and ensuring that peace is maintained,” she said. She mentioned that Pakistan continued to engage with international players including the neighbouring Afghanistan to ensure that the terrorism emanating from Afghan soil could not affect it. She hoped that the Afghan authorities would work towards fulfilling the commitments made to Pakistan to not allow their territory to be used against its neighbour. Asked if Pakistan was using China’s leverage to counter Tehreek-e-Taliban Pakistan (TTP) in the backdrop of the country’s engagement with Afghanistan, Baloch said Pakistan and China were close strategic partners and “We consult each other on all matters of interest including counter-terrorism and on the situation in Afghanistan.”

In response to the delay in disbursement of salaries to Pakistan’s missions abroad, the spokesperson said the process had been restored that faced suspension due to a “very complicated” issue pertaining to the Ministry of Finance, the State Bank, and the international channels. “Soon all the missions will have the requisite funds,” she said.

Asked about the update on the status of Indian serving Navy Commander Kulbhushan Jadhav who is serving a death sentence in Pakistan, she said, “There is no change in the status.” This week, the spokesperson said, Pakistan would host Deputy Prime Minister of Kazakhstan Serik Zhumangarin, who will lead a high-level delegation for the Pakistan-Kazakhstan Intergovernmental Joint Commission (IJC) – an important mechanism to promote mutually beneficial cooperation. The meeting will focus on cooperation in trade and investment, agriculture, energy, transport and industry, science and technology, banking, higher education, and tourism, she said. The spokesperson said last week, the Indian delegation once again politicised an international forum to project its agenda to target and malign Pakistan. For the last several years, India politicized the Financial Action Task Force (FATF) process to prevent Pakistan’s exit from the Grey List and is following a similar agenda at the UN Security Council, she added.

“For a country that has a grandiose vision about itself and its place in the world, India has been unable to act as a responsible member of the international community that can assume new privileges that it aspires,” she said.

Baloch said India masqueraded itself as a victim of terrorism, yet it is itself a perpetrator of repression in Indian Illegally Occupied Jammu and Kashmir and a sponsor and financier of terrorist groups in South Asia, including Pakistan. “We are concerned about the rise of extremist nationalism in India and its expansionist designs for the region. We still await condemnation from the Indian leadership on the recent call for violence and assassination by a BJP leader from Bhagpat,” she said. The spokesperson said the occupation authorities were sealing properties owned by Kashmiris including those dedicated to educational institutions offering free education to disadvantaged Kashmiris. A property owned by Late Hurriyat Leader, Syed Ali Shah Gillani, located in Barzulla Srinagar, has also been designated for closure.