NSTP is nothing short of a creative powerhouse for innovation: Ahsan 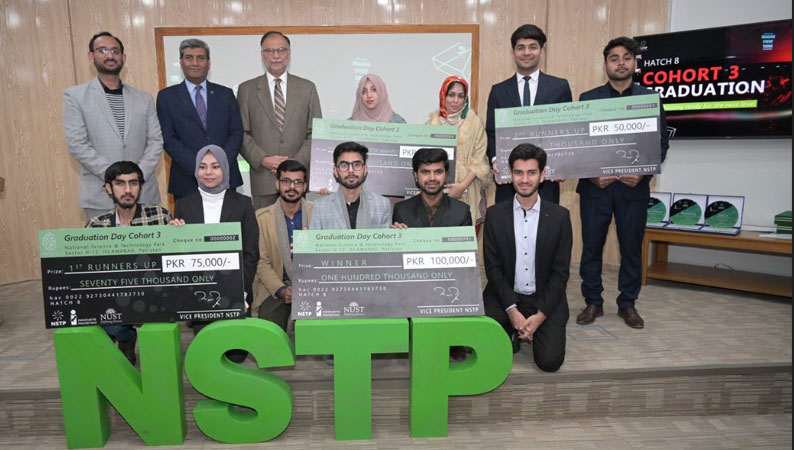 The National Science &Technology Park at NUST held the graduation ceremony of the 3rd cohort of its Hatch 8 programme at the NUST main campus on Thursday. As many as 16 startups built upon disruptive ideas have graduated as part of the third cohort. Hatch 8 is a pre-incubation programme of NSTP, which admits entrepreneurs at the idea stage of their product development and transforms them into viable businesses in due course of time.

Mr Ahsan Iqbal, Federal Minister for Planning, Development & Special Initiatives, was the chief guest who felicitated the startups upon graduating from one of the most robust innovation ecosystems in the region. He was all-praise for NUST for having come up with the game-changing initiative of NSTP, which truly is a breeding ground for innovation. He further said that creativity is the solution to each one of our problems and NSTP is nothing short of a creative powerhouse for innovation.

Dr Rizwan Riaz, Pro-Rector RIC, expressed his utmost pleasure in seeing the increasing number of people stepping forward with their startups, and paving the way for their own betterment and that of the society. He said that owing to its outstanding accomplishments, NSTP has been making headlines internationally, which is a matter of great pride for the whole nation. Our startups at NSTP, he maintained, are gaining attention from International Investors like Peter Theil and Adam Draper’. He also thanked Mr. Ahsan Iqbal, Minister for Planning and Development who initially approved the project of NSTP.

During the course of Hatch 8 Programme, entrepreneurs go through hands-on learning, aimed at inculcating in themselves the entrepreneurial skills and relevant business acumen, all the while nurturing their business ideas. Expert mentorship and coaching is provided to startups during the programme. In addition, the programme offers an array of services, ranging from workshops to boot-camps, free co-working space and access to mentors and investor networks.

The programme culminates at the graduation ceremony, wherein startups present their businesses to an audience comprising local and international experts and investors. Following the graduation, startups can join the Cube 8 Incubation Programme of NSTP. Since its inception in 2021, the Hatch 8 Programme has completed 3 cohorts, with 10 graduates in the first, and 16 each in the second and third cohorts.

The tech startups graduating from the Park, inter alia, span a wide array of themes ranging from Ed-Tech Health tech, and Smart-Tech. Out of the 16 startups, four were given awards for high achievement on the basis of revenue generation, customer base and socio-economic impact. The Innovator award was presented to As-Siraat, followed by the first and Second Runner-ups being InLights and Gameotivity respectively. The top performer startup award was given to Bendecrete.

The graduation ceremony was followed by the launch of the Rising Stars Startup Cup, a business competition at NSTP, aimed at helping women and minorities in Pakistan. The competition will be run in collaboration with the US Embassy and Draper University as knowledge partner while Pak Mission Society as the outreach partner.