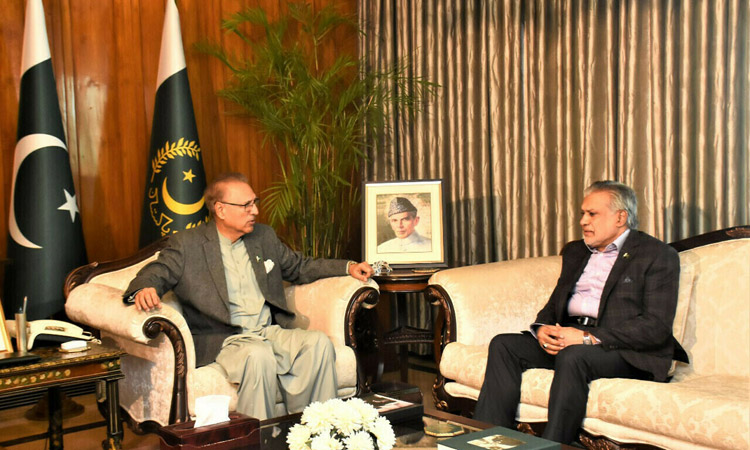 President Dr Arif Alvi on Wednesday proposed meetings between the opposing camps in which “everything can be discussed, including early elections as well”. Elaborating on his meetings with Finance Minister Ishaq Dar in an interview to a private TV channel, Alvi said that it was necessary for him to continue efforts on keeping people together as the president. He said that Dar had a “talent for reconciliation” – referring to his efforts during the PTI’s 2014 sit-in – and that was why he had asked the finance minister to make similar efforts again since he had a “reputation of trying to bring things together”. “I think positive [outcomes] will be achieved.” The president said that political temperatures would come down if talks began. He also elaborated on other matters discussed with the finance minister in Wednesday’s meeting, saying that Dar had proposed import restrictions to which Alvi said he in turn suggested energy conservation measures. Alvi said he discussed the military’s recent distancing from politics with Dar and how the development only meant greater responsibility for politicians. “Take steps while considering this responsibility and don’t create problems so someone develops second thoughts.” Speaking on other matters during the TV interview, the president said he liked Army Chief Gen Asim Munir, adding that he would work to reduce mistrust between institutions.

“I have confidence that Pakistan’s armed forces are in good hands,” he asserted, adding that the new military leadership was committed to staying away from politics. The president also expressed concern at rising terrorism incidents, but, at the same time, said he was confident that no one was better experienced in the area than the Pakistan Army. Regarding recent political developments such as the situation around PTI Senator Azam Swati’s arrest and the multiple cases against him, the president blasted the practice and said: “Whoever is doing this must stop.”

Earlier in the day, a statement from the Aiwan-e-Sadr said that Dar called on President Alvi today and discussed various matters concerning the economy, finance, and the rehabilitation of flood affectees. According to the press release, Dar briefed the president about steps taken by the incumbent government to provide relief to the most vulnerable segments of society, especially those who were underprivileged or affected by this year’s destructive floods.