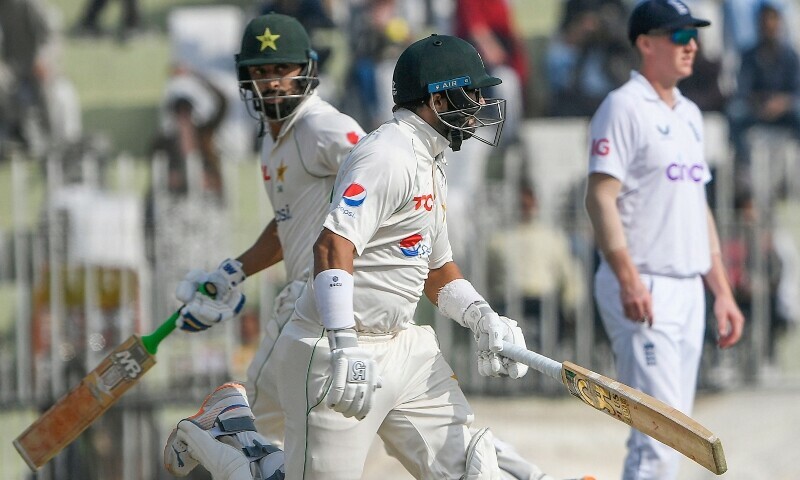 Pakistan safely negotiated the early overs to reach 17 without loss at lunch on Friday — the second day of the opening Test against England, after the visitors were all out for a mammoth 657 in Rawalpindi.

Openers Imam-ul-Haq and Abdullah Shafique were on 11 and six respectively as Pakistan need 458 to avoid the follow-on — a huge task despite the flat Rawalpindi Stadium pitch.

Earlier, resuming at 506-4, England added 151 runs in 125 minutes in the extended two-and-a-half-hour session, with Harry Brook taking his overnight score of 101 to 153 — one of four centurions in the innings.

Skipper Ben Stokes (41), debutant Liam Livingstone (nine) and Brook were all dismissed by pacer Naseem Shah, who finished with 3-140.

Leg-spinner Zahid Mahmood conceded 235 for his four wickets — the most by a bowler on a Test debut.

England’s total is their highest against Pakistan in all Tests, improving on their 589-9 at Manchester in 2016.

On Thursday, England became the first team to score 500 runs on the opening day of a Test match, bettering Australia’s 112-year-old record of 494-6 against South Africa in Sydney.

The three-match Test series is England’s first in Pakistan for 17 years.

England and Pakistan will contest a three-Test series with the first match already started from Dec 1-5, the second in Multan from Dec 9-13 and the third in Karachi from Dec 17-21.