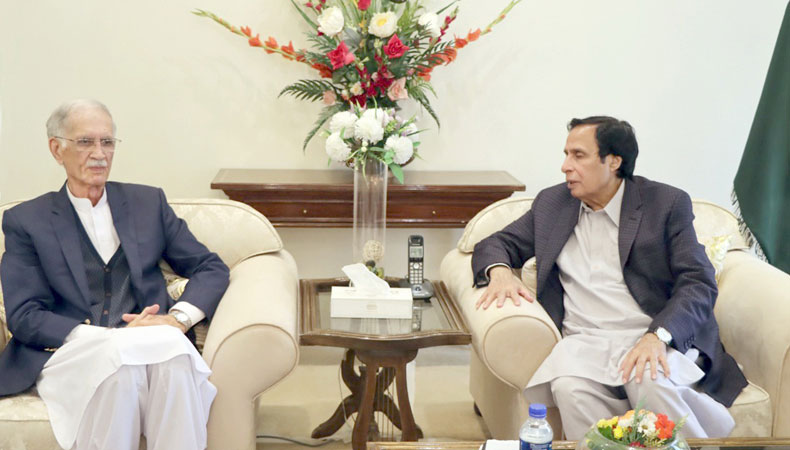 PTI leader and former federal minister Parvez Khattak met Chief Minister Punjab Chaudhry Parvez Elahi at Punjab House, Islamabad on Tuesday and discussed different issues. Both deliberated upon the rules of procedure of the assembly and a detailed review of all technical aspects regarding the assembly was also debated.

Chief Minister Parvez Elahi asserted that the opposition should realize that the Punjab assembly would not run on the personal wishes of anyone. By the grace of Allah Almighty, everything would be done under the law and constitution; he added and maintained that the submission of a no-confidence motion or imposing the governor’s rule is a hollow dream of the opposition and it would remain so.

The mass popularity of Imran Khan is beyond doubt as he has revived the spirit of self-respect in the nation, the CM noted. Meanwhile, the so-called 13-parties cabal is taking its last breath. The federal government, consisting of incompetents, has made life difficult for the common man; he said and remarked that allies would be at daggers drawn very soon. We have supported Imran Khan earlier and would continue to stand by his side, the CM concluded.

Parvez Khattak said that Imran Khan does not indulge in the politics of personal interests while PDM has always prioritized its political interests over national interests.

Chief Minister Punjab Chaudhry Parvez Elahi has said that the era of former army chief Qamar Javed Bajwa will be remembered in history and the hearts of people.

In a video message, the CM said that the world recognises outgoing COAS’s role in Operation Radd-ul-Fasaad. The credit for ending terrorism in the country goes to Qamar Javed Bajwa who worked hard to end terrorism in Swat, tribal areas, and Waziristan and also eliminated the terrorists. Alhamdulillah, there is peace in all areas including Khyber Pakhtunkhwa and people are relaxed, he noted. After the earthquake, the Pakistan Army, under the leadership of former Army Chief Qamar Javed Bajwa, did a lot of work. Even in floods, the army reached everywhere in time, including the affected areas of Punjab, he cited. During the floods in Sindh, no one worked except the Pakistan Army. The worst flood occurred in Khyber Pakhtunkhwa and Qamar Javed Bajwa himself reached there, the CM added.

The chief minister also acknowledged the countless social and religious services of Gen (R) Qamar Javed Bajwa. Saudi Arabia imposed a ban on the world’s largest Tablighi Jamaat due to a misunderstanding, then former Army Chief Qamar Javed Bajwa played a leading role in removing the ban, he mentioned. In the gatherings of the Tablighi Jamaat, the people prayed the most for his long life and the continuation of policies. Parvez Elahi stated that Qamar Javed Bajwa’s role is good for religion, country and future generations. I understand that people come and go, but their work is always remembered. The work done by Qamar Javed Bajwa for the safety, security and progress of the country will be remembered forever, he added.

The CM asserted that India should not think that we are deserted, this can never happen. The Pakistan Army is the best organization in the world and there is a whole system. The best army in the world is the Pakistan Army. Pakistan Army keeps an eye everywhere, especially on foreign policy and other issues that are also under their observation. With the help of Allah Almighty, the new Army Chief Syed Asim Munir will not let anyone cast an evil eye on the motherland, the CM concluded.

The CM also paid tribute to the services of the outgoing army chief Qamar Javed Bajwa and said that he played a historic role in ending terrorism and establishing peace. Under the leadership of Gen Qamar Javed Bajwa, armed forces rendered invaluable services in economic stabilization, diplomacy and natural disasters. Gen Qamar Javed Bajwa’s unparalleled role for the country would always be remembered, he concluded.

The CM said that a spate of development work has started in every constituency and added that parliamentarians are his team members and people would be served together. I would visit Sialkot and Kamalia soon; he added and commented that the hollow slogan of honoring the vote has died. The opposition dreaming of coming to power in Punjab does not have enough numbers while the PDM-led cabal has played havoc with the economy. Those who raised the slogan of saving the country have brought Pakistan to the brink of destruction and those who came out to save the country are now finding it difficult to save their petty politics. Imran Khan is our leader and we are with him, the CM concluded.

Chief Minister Punjab Chaudhry Parvaiz Elahi has expressed a deep sense of sorrow and grief over the death of former FPCCI president and chairman Din Group SM Muneer. In his condolence message, the CM extended heartfelt sympathies to the bereaved family and prayed that may Allah Almighty rest the departed soul in eternal peace and grant patience to the bereaved family.