* In the sweet snap, Kaley is wearing a grey fitted ribbed sweater under a fuzzy teal jacket and wearing her signature fringed hairstyle down and wavy 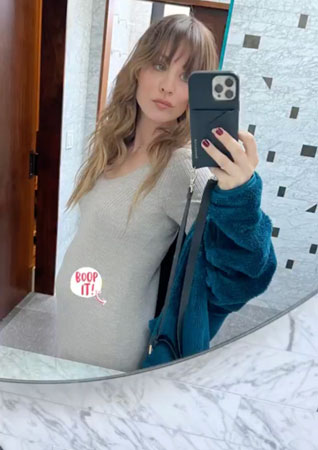 Kaley Cuoco is bumpin’ along. The actress, who is expecting her first child with Tom Pelphrey, shared an update of her pregnancy journey, posting a mirror selfie which showed off her growing baby bump. In the sweet snap, Kaley is wearing a grey fitted ribbed sweater under a fuzzy teal jacket and wearing her signature fringed hairstyle down and wavy. Over her belly, she added an animated GIF that read “Boop It!”

Last month, the Big Bang Theory alum and the Ozark actor announced on social media they are expecting their first child together. “Baby girl Pelphrey coming 2023,” Kaley shared on Instagram. “beyond blessed and over the moon… I you @tommypelphrey !!!”

Tom also shared photos of the couple kissing and slicing into a pink sex reveal cake. “And then it was even MORE BETTER,” he captioned the gallery. “Love you more than ever @kaleycuoco.” Since sharing their happy news, Kaley hasn’t been shy about documenting her road to motherhood on social media. Fans got their first look at her baby bump in a polaroid photo posted to Instagram on Oct. 11, showing the mom-to-be is wearing casual sweatpants and a bra top while Tom hugs her from behind with his hand on her hips.

In another black-and-white pic, Tom is seen sweetly kissing Kaley’s belly. In a clip shared to her Instagram Stories, the actress also revealed that she’s already introduced her bump a.k.a “bub,” to her beloved horses.

Kaley, 36, and Tom, 40, first met at the Ozark premiere in April and made their romance Instagram official the following month. “I heard his voice, and I turned around, and it was like my life was over, or just starting,” Kaley told USA Today in May. “It hit me. It was love at first sight. We were immediately connected. I do feel like I’ve known him my whole life.”

In September, the couple made their red-carpet debut at the 2022 Emmys. Kaley was nominated for Lead Actress in a Comedy Series for her role in the Flight Attendant and Tom received a nod for Outstanding Guest Actor in a Drama Series for his role in Ozark.

The romance comes one year after Kaley split from ex-husband Karl Cook. Reflecting on the divorce, the star admitted she met her new man at a “rough” time.

“I took a lot of time to myself and spent the year kind of figuring myself out,” she told E! News in an exclusive interview Sept. 21. “That’s why I’d never want actual time travel because it would really mess with the real time of what your life needs to be.” She added. “And then, I met Tom, and everything changed.”