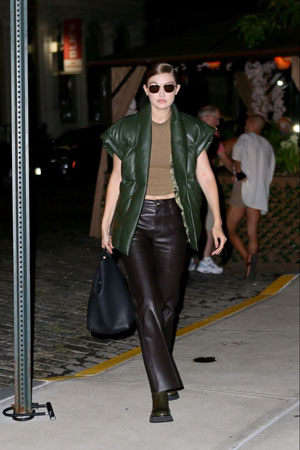 Gigi Hadid looked effortlessly chic as she stepped out in Brooklyn after her low-key dinner date with her beau Leonardo DiCaprio.

The supermodel cut a stylish figure in a black sweater and matching jeans along with a cool jacket while her blonde tresses were styled in an updo.

She flaunted her natural beauty by going makeup free and carried a black purse on her right shoulder while holding her phone in her hand.

Hadid’s appearance comes after she was spotted leaving a restaurant in New York City with The Wolf of Wall Street star as they tried to conceal their faces from the cameras.

She was captured wearing flared trousers and a black leather jacket as she tried to hide her face with her blue scarf from the paparazzi.

Hadid and DiCaprio sparked dating rumours when they were captured getting cosy at a fashion week party in New York City some days after the actor parted ways with Camila Morrone.