I WILL MEET YOU THERE on Nov 26: Destination Rawalpindi 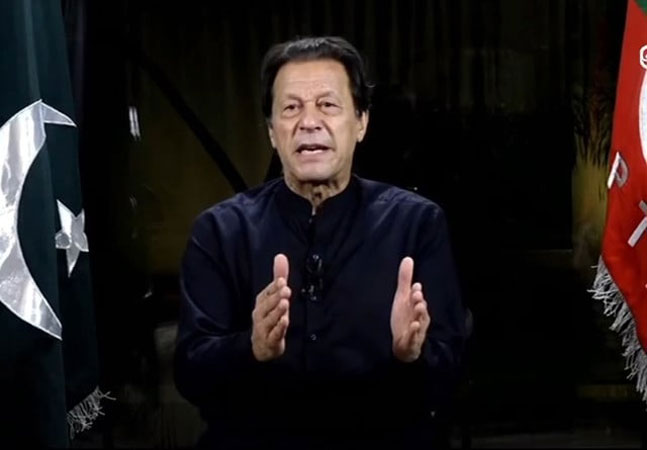 Former prime minister and PTI Chairman Imran Khan has asked his supporters and party leaders to converge on Rawalpindi on November 26 to demand free and fair elections in the country.

“I am inviting the entire nation to reach Rawalpindi on November 26 (next Saturday). I will meet you there and announce future course of action. This movement is not going to stop even after this march,” he said, while addressing supporters via video link in Rawat on Saturday.

Imran Khan said that he will give the next plan of action for the party’s long march after his supporters reach Rawalpindi on November 26. “You have to fully try to reach between 1-2pm. I will myself address and give the next plan of action,” he said, adding that the PTI’s movement would not stop. Imran Khan said that the nation cannot afford to remain neutral at the current juncture.

“If you remain neutral today then your children and coming generations will regret that you sat in homes when you should have struggled against injustice.

“I have no need to risk my life and set out but it was in my mind from childhood that death is better than slavery. This is slavery what is happening. I as an ex-prime minister could not register my FIR … so think what rights you as the nation have,” Imran said.

He said humans had rights and until they did not stand up for their rights then society would remain a jungle. PTI Chairman Imran Khan has said the establishment can either take the country in a positive or negative direction.

He said that he had a question for the establishment, to which he still had not received an answer. “What was it that in 3.5 years these people (Sharif and Zardari families) were bathed in that they suddenly became acceptable for the establishment and were placed over us?” Imran questioned. He asked whether the establishment was not aware of their past, adding that the agencies had all details on their histories and past dealings.

“My question is after seven months tell me any one thing they did better in the country.” Imran Khan alleged that the PML-N and “Dirty Harry” were behind the Geo News expose story against him.

“They made the story on me about what I did with the watch,” he said, adding that he had to “sadly” say he would not get justice from local courts and that is why he would be approaching international courts.

“I know I will get justice there,” Imran said, adding that he was familiar with how those courts operated. Imran Khan said that his life is still in danger after the Wazirabad assassination attempt against him. He said that he received letters before his rallies in the past six months, warning him about the threat to his life. “I knew that they were making a plan to kill me but I still proceeded,” Imran said, adding that those who had tried the previous attack against him were still present and so there was a persistent threat to his life.

Imran Khan, in his virtual address, asked the people to highlight one positive thing that happened during the seven months that the incumbent government was in power. “What was the urgency that these thieves were imposed on us. Tell one thing that they did in the seven months which was positive for Pakistan,” Khan asked. He claimed that neither people at home nor abroad have confidence in the current government.

“Terrorism has increased they do not even have time to think apart from themselves. The establishment should tell what happened in the seven months since the change of government,” Khan questioned. He added that the current rulers’ track record was in front of the nation for the last 30 years, adding that the establishment also labelled them corrupt. “Maybe they have something that I did not see,” Khan said, urging Pakistanis not to remain neutral or their future generations would suffer.

Khan stated: “Powerful quarters have a responsibility and the only way out of this quicksand is free and fair elections.”Reiterating his stance on “slavery”, PTI chief Imran Khan said national decision should be taken by the nation, adding that country’s shouldn’t become slaves to superpowers.

“Pakistan wasn’t established for people seeking help from other,” he said. The PTI chief further added that his party wants an independent country. He lamented that he has to share India’s example time and again, however, added that although the country was formed along with Pakistan but it has an exemplary foreign policy.

“US was upset with India for importing oil from Russia but because of India’s firm stance in the interest of its people the matter was resolved,” the former premier said, lambasting the incumbent coalition government for burdening the masses by not buying oil from Russia in fear of their “master.”

The former prime minister berated Foreign Minister Bilawal Bhutto-Zardari, saying that he has no “political future”. “He still can’t speak Urdu properly and people can’t understand him. I predict that most of his life will be spent on finding where his father [PPP Co-Chairman Asif Ali Zardari] has stashed money from corruption,” Khan said addressing the Haqeeqi Azadi marchers via video link.