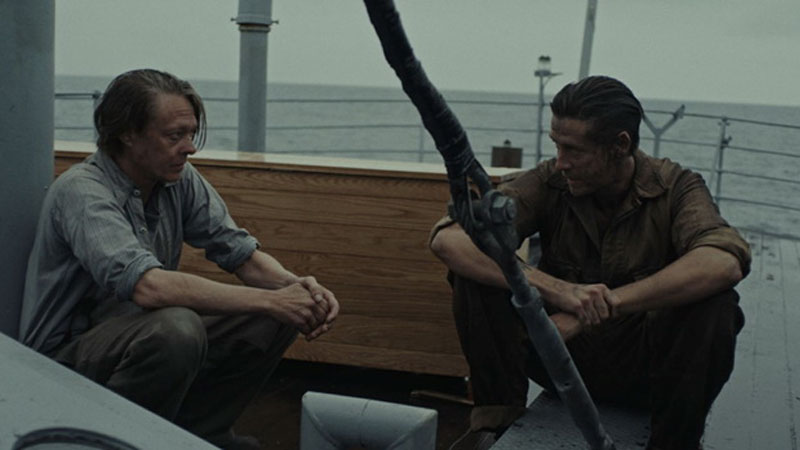 Winston Churchill acknowledged that the 30,000 Norwegian merchant sailors signed up by their government to aid England and the Allies during World War II were instrumental in the victory against Hitler. But the story of these men and women, who never enlisted in the armed forces, remains a footnote, generally overshadowed by accounts of more traditional military heroes. Writer-director Gunnar Vikene pays stirring tribute to them in War Sailor (Krigsseileren), an impressively crafted chronicle of male friendship, courage and trauma that folds together intense action and intimate psychological observation with a moving portrait of the enduring after-effects on one family.

One of the chief strengths of Vikene’s meticulously researched script is that it gives equal attention to the civilians at sea in the firing line and the woman and children waiting at home for one of them in the coastal city of Bergen under German Occupation. That gives the film – the most expensive Norwegian production ever made – a novelistic sweep, particularly in the eventful postwar developments where complications of loyalty and familial responsibility take hold in a somber romantic triangle, along with the challenges and consequences of survival.

The story spans from 1939-1972 and was inspired by real people. Lifelong friends Alfred (Kristoffer Joner) and Sigbjørn (Pål Sverre Hagen), fondly known to each other as Freddy and Wally, are dockworkers in Bergen. With paying jobs in the port drying up, they accept an offer to sail on a cargo vessel to New York, even though Alfred is reluctant to leave his pragmatic wife Cecilia (Ine Marie Wilmann) and their three children for 18 months.

The recent sinking of a Norwegian ship off the Netherlands has their distressed daughter Maggie (Henrikke Lund-Olsen) convinced that Alfred will be killed. But Cecilia extracts a promise from Wally to make sure her husband gets home.

In a nail-biting sequence several months later, Alfred proves himself a man of principle and compassion by defying orders and rescuing crew that have gone overboard in the mid-Atlantic. But when the ship’s captain (Nils Ove Sørvik) reprimands him, he adds the sobering news that all merchant vessels have been commandeered by the Allied Forces, and the Germans have occupied Norway. The crew’s only choice is to stay on and serve in the war effort for the duration or jump ship and be branded as traitors, blacklisted by the shipping companies.

In action marked by letters home that Alfred is unable to send due to the Occupation, the years pass with port stops in Liverpool, Malta and eventually, New York in 1944. He takes a protective fatherly interest in Aksel (Leon Tobias Slettbakk), a boy rescued at sea, not much older than his own eldest son, William (Armand Hannestad). A young woman on their crew, Hanna (Alexandra Gjerpen), shows she’s the equal of any man in terms of bravery.

Hanna and Aksel are given the option to remain in New York when their ship is tagged for the notorious Murmansk Run, transporting war materials across the Atlantic in dangerous Arctic convoys that already had drawn the full weight of the German air force and navy. But both young crew members choose to stay on in solidarity with their fellow sailors, resulting in traumatic scenes at sea and a long, seemingly futile wait for rescue as casualties continue to mount. The toll of those losses becomes particularly corrosive for Freddy.

Vikene and accomplished cinematographer Sturla Brandth Grøvlen (Another Round, The Innocents) shoot the action in the ocean rather than studio tanks, resulting in pulse-racing verisimilitude and claustrophobic panic. The potent visuals are matched by dense sound design, with Volker Bertelmann’s cello-based score full of haunting, atonal passages, echoing the crashing, groaning noise of metal hulls ripped apart by torpedoes.

The director makes sharp use of documentary techniques, for instance when the names of those killed on a ship sunk by U-boats are heard over solemn shots of their faces. Elsewhere, history is woven more conventionally but no less effectively into the drama, notably with the tragic bombing of the Holen elementary school in Bergen by Allied Forces aiming for a German U-boat bunker in the port. Scenes of Cecilia frantically combing the rubble for her children are heartrending.

The focus shifts gracefully throughout between sequences at sea and on the home front, with life there marked by constant fear of bombing raids. When Freddy and Wally are picked up on a raft near death and taken to a hospital in Halifax, that might seem to point toward an end to their ordeal, but grim news from Bergen puts a further strain on Freddy’s already shattered equilibrium.

Hagen’s easygoing Sigbjørn brings spirited warmth to the drama but it’s the altruism and strength of Joner’s Alfred that is the heart of the film, even more so as those qualities are drained out of him by harrowing experience.

Wilmann has a number of quietly moving scenes as Cecilia, particularly as she navigates the difficult readjustment to life after war, and the three remarkable actresses who play Maggie at different ages – Lund-Olsen, Téa Grønner Joner and Siv Torin Knudsen Petersen – trace an affecting arc from the emotional volatility of childhood through the grounded calm and concern of adulthood. All three of Alfred and Cecilia’s children are superbly cast at various ages.

As much as the brutality and physical suffering of war, the film is about the agonizing uncertainty of limited communication chains and imprecise information causing damage that can last for generations. War Sailor is above all a poignant salute to the Allied civilian sailors – not only Norwegians, but also Canadians, Americans and others – that served honorably but often were denied the same rights as enlisted military in the years after WWII, their lack of uniforms and medals unjustly diminishing their sacrifices. It’s a film of deep sadness that stays with you.