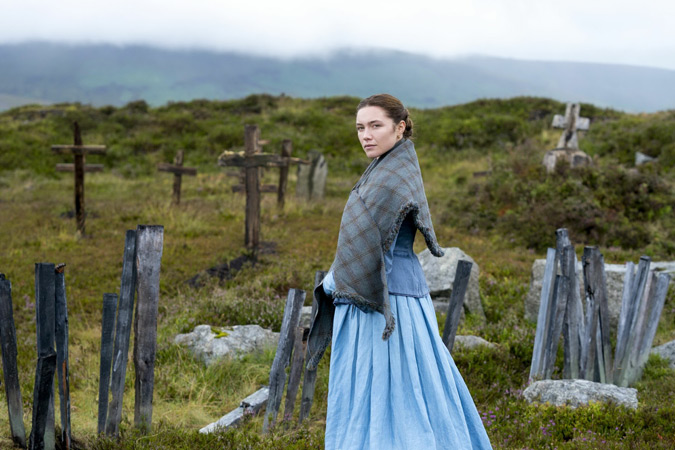 Divinity and depravity collide in director Sebastian Lelio’s The Wonder. It’s the second Netflix film in less than a month, after The Good Nurse, to be thoroughly misrepresented by its mid title. And like that film, it, too, demands to be experienced without any prior information about its deliriously engaging plot.

It begins with a shot so unexpected that for a moment, I was convinced that I had hit play on the wrong movie. But after having delighted in rocking the boat even before opening titles sequence, Lelio settles into a more uniform tone. Granted, this isn’t a tone that you’d expect from a ‘period movie’ – The Wonder is a psychological thriller more than a drama – but by essentially slapping the audience across the face in the opening 10 seconds, Lelio succeeds at creating a sense of discomfort, which he sustains throughout the film’s 100-minute-plus run-time.

There is a danger to watching too many films. After a point, you begin to notice nothing but glibness. The only thing that empowers you to keep ploughing through is the waiting game that you play in anticipation of that magical moment of subversion. In most cases, this moment never arrives. But there is no greater joy than submitting yourself to a film and having your expectations shattered. This is what makes The Wonder such a breath of fresh air in a marketplace clogged with algorithm-driven pieces of ‘content’.

A nun and a nurse are summoned to rural Ireland in 1862, to take turns at ‘watching’ a young girl who is said to have survived without food for four months. The purpose of the watch is to understand if this is a miracle or an act of mischief. The two women must work independently, and avoid conferring with each other. These are the rules. They must not intervene, regardless of what they observe. They must simply present their findings to a committee of men in two weeks time.

Florence Pugh plays the Nightingale nurse Lib Wright. She arrives at the young girl’s countryside house with more baggage than what she is carrying in her hands. Nurse Wright is alone in the world; she lost her only child at three weeks, and was subsequently abandoned by her husband. “He may as well be dead too,” she says matter-of-factly in one scene.

Immediately, Nurse Wright is sure that something sinister is afoot. In a brief but important early scene, she asks the young girl’s relative what the last meal she ate was. The flesh and blood of Christ, the relative says. This is a devout community, and everybody has decided that the girl has been touched by a saint or something. But Nurse Wright isn’t having any of it. Responding to the relative, she says impatiently, “So, wheat and water?” It is through scenes like this that the film establishes her level-headedness; The Wonder doesn’t rely on unnecessary exposition, or pointless backstory, and yet, its characters feel wonderfully fleshed out. Lelio’s direction is decisive.

As stories of the young girl’s ‘feat’ begin to spread, a journalist comes along, determined to disprove the superstitious narrative. He’s from London, too, he tells Nurse Wright proudly, but his Irish accent betrays him. The nurse’s efforts at debunking the ‘miracle’ aren’t elaborate, but the stunt itself might remind you of similar scams that are wrought in the name of god in our own country. How many young girls have we seen sitting in a tub of boiling oil, emptied out of a canister that is slowly filling up with cash claimed from the pockets of the easily convinced?

Having a nurse and a nun take turns at observing the ‘devi’ neatly captures the ideological conflict at the film’s centre. The Wonder deals with themes of disinformation, delusion, and self-destruction. Based on a novel by Emma Donoghue, who co-wrote the script, the film reunites Pugh with Alice Birch, who authored her breakout movie, Lady Macbeth. There can be no doubt that Pugh has lived up to the promise that she showed in that excellent film, and despite a couple of unavoidable detours via the Marvel Cinematic Universe, it’s heartening to see her return to her roots. Cinematographer Ari Wegner’s camera often isolates Nurse Wright in the vast countryside landscape, but it’s Pugh’s performance that highlights her lonely fight for the truth.

A historical drama about the aftershocks of the Irish famine, a horror movie about a possessed young girl, or even a satire about blind faith, the timidly titled The Wonder is open to interpretation, but most impressively, it is about as hardcore a movie can be without having serial killers or cannibals in it.