Why hot pink is the biggest fashion trend? 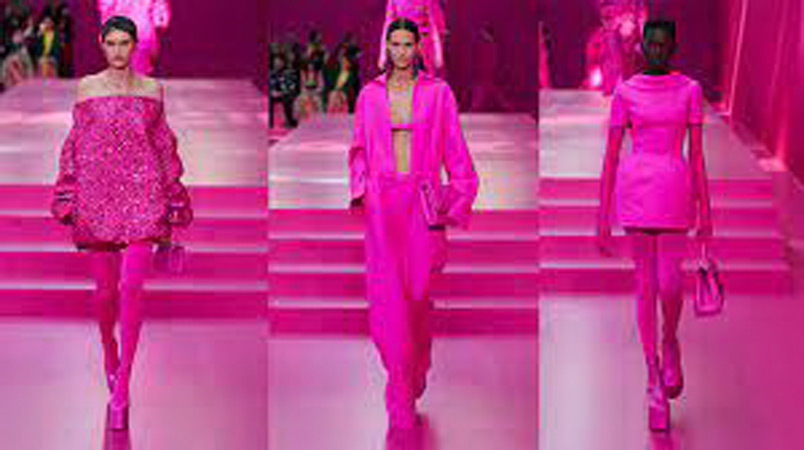 It seemed like 2022 would be the year of Very Peri, after Pantone declared it colour of the year. But, trendsetters had other plans. The vibrant and vivacious hue, hot pink, took over runways, red carpets and other fashion events, as celebrities, designers and influencers made it their go-to colour for the year. Bringing a much-needed sense of positivity and excitement, this electric hue trend was first popularised by Pierpaolo Piccioli, creative director, Maison Valentino, when the colour grabbed everyone’s attention at the Paris Fashion Week, earlier this year. The designer collaborated with Pantone Colour Institute, to create a custom shade of pink called Pink PP. Piccioli literally painted the runway in pink, when he showcased his fall/ winter 2022 collection, at the same fashion week.

Shortly after, other fashion houses and designers started featuring the hot pink hue in their collections – like Versace’s Medusa Aevitas platform pumps and Balenciaga’s velvet blazer worn by socialite Kim Kardashian. Recently, luxury brand Louis Vuitton launched an exclusive footwear collection for the Indian market. One of the designs features the new colour ‘Rani Pink’ that celebrates the Royal Family of Rajasthan and their signature pink colour.

Celebrity stylist Natashaa Bothra comments on the pink takeover, saying, “It was a risky choice by designer Pierpaolo Piccioli [to launch his collection in all pink], but it eventually swept everyone off their feet. From there, everyone started embracing bold and hot pink.” 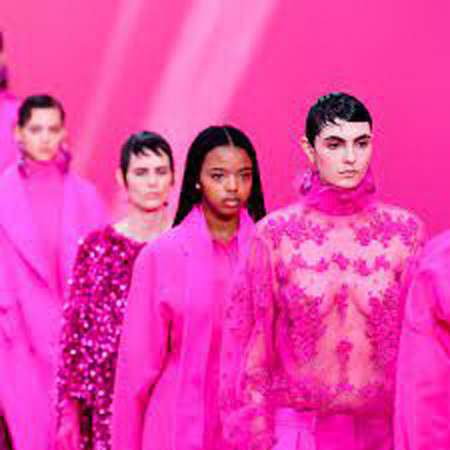 Celebrities can’t seem to have enough of the eye-catching colour. Media personality Paris Hilton walked as the showstopper for Versace’s spring/summer 2023 show in a hot pink sparkly attire. Closer home, actor Ranveer Singh showed how the unconventional pink can be donned by men as well when he recently stepped out in a complete Pink PP look.

Similarly, actor Aishwarya Rai Bachchan wore a head-to-toe Maison Valentino pantsuit with platform heels at the Cannes Film Festival, earlier this year. Content creator Masoom Minawala Mehta graced the red carpet at Cannes in a voluminous Yousef Akbar number and a pleated Valentino dress in the same colour. Ask her what made her choose the ensembles and she says, “I consciously chose to don the colour twice at Cannes, as I wanted to embrace the power and the boldness that hues of pink have.”

Conventionally, pink has not been perceived as a gender-neutral colour, with Barbiecore to gender reveal parties associating the hue with feminine aesthetics. However, the stereotype is being shattered, one designer at a time. “It’s for the first time in centuries, that pink has been able to take on genderless qualities,” explains Mehta, adding, “The hot pink hue is fresh, yet powerful. It is not the soft and sweet pink – it’s strong, and bold, yet feels good.”

For celebrity stylist Isha Bhansali colour never had a gender. “I have used pink to create/make outfits for many of my male clients. The hot pink hue has an electric quality. So, it works well now as men’s fashion is all about experimenting with colours currently,” she elaborates.

On the other hand, Bothra believes, “It can be credited to Gen Z ready to take risks and breaking gender stereotypes”. She elaborates, “The colour has been more like a breakthrough for brands where psychologically it challenges men as well.” The hue, which is culturally one of the first colours to ever appear on planet Earth 1.1 billion years ago is now being used as a means to beat the pandemic blues. Designer Lakshmi Babu explains, “With dopamine dressing trending in the post-pandemic era, loud colours have become a favourite among designers and celebrities. The bright hot pink hue struck a chord, because while it looks angry, it also helps one get out of the dull and gloomy times.”