* For glam, Taylor swept up her locks into a bun with her signature bangs hanging down and added a sharp cat-eye and glossy lip 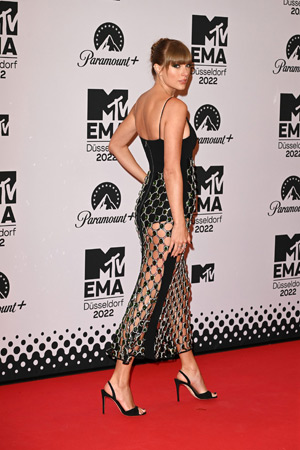 She can still make the whole place shimmer. Taylor Swift made a fierce appearance on the red carpet at the 2022 MTV Europe Music Awards on Nov. 13 in Duesseldorf, Germany.

In a daring look, the “Anti-Hero” singer wore a sexy David Koma ensemble, which included a black bodysuit layered with a statement bejewelled chain-link patterned skirt covered in dazzling emerald stones surrounded by tiny crystals. She accessorized with black slingback sandals from Giuseppe Zanotti and a collection of edgy ear cuffs.

For glam, Taylor swept up her locks into a bun with her signature bangs hanging down and added a sharp cat-eye and glossy lip.

Later in the evening, the 32-year-old-who was nominated in six categories-took home the awards for Best Artist, Best Video, Best Pop and Best Longform Video for “All Too Well: The Short Film.”

Taylor’s award show appearance comes three months after she took home Video of the Year at the 2022 MTV VMAs. That night she also announced her 10th studio album Midnights. Released Oct. 21, the album hit No. 1 on the Billboard charts, and Taylor became the first artist in the chart’s 64-plus-year history to ever occupy every single song spot in the top 10.

To support Midnights among her other albums, Taylor will embark on the Eras Tour in 2023 alongside several opening acts include Paramore, GAYLE, beabadoobee, Gracie Abrams, Phoebe Bridgers, girl in red, OWENN, MUNA and HAIM.

“It’s a journey through all the musical eras of my career,” she said in a video message to her fans on Good Morning America on Nov. 1. “I’m just so excited that I get to look you guys in the eye and say ‘thank you’ for everything. Thank you for this incredible week with Midnights and everything that you’ve done for me.”

She added, “I just am very excited to see you.”