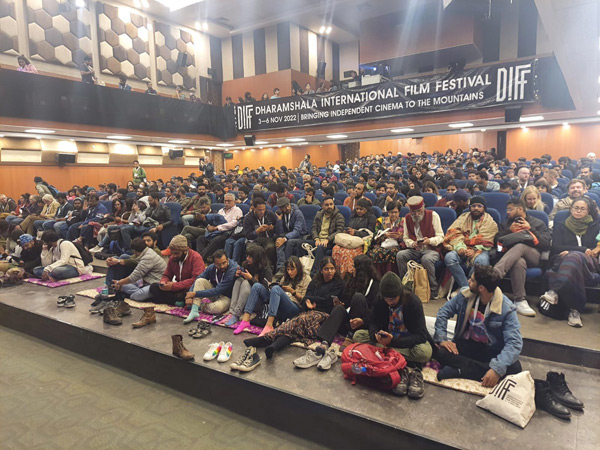 Saim Sadiq’s Joyland made waves at the 11th edition of the prestigious Dharamshala International Film Festival (DIFF) in India this year.

Only not the shows were houseful, but there was a queue, lined up outside the venue where an audience eagerly waited to finally watch the Cannes winner from Pakistan.

The achievement is a huge feat since political differences between the neighbouring countries have made it nearly impossible to collaborate on arts and culture. However, thanks to DIFF, the film had its Indian premiere on November 6 and it received rave reviews.

A tweet from the official account of DIFF described Joyland as, “Stunning. Incredible. Mesmerising. Jaw-dropping,” with a picture of a large audience marvelling at Sadiq’s brilliance. In awe, another tweet read, “what do you even say after a movie like that Joyland?”

A film critic detailed the overwhelming environment at the venue following the screening. “People were crying, many were seen hugging. Saim Sadiq’s premiere in India was such a momentous occasion. I have seen the film twice now but was still emotionally blown away. I hope the film gets an Oscar nomination. Proud moment for all desis.”

It was reported that originally, there was only one show for Joyland, but given the popular demand, another show was arranged. “The joy for Joyland is immense at DIFF,” wrote a user while attaching a video of the long queue of Indian movie fanatics waiting to watch Joyland.

“Just look at this queue for the 5:50 pm screening of Saim Sadiq’s film starring Alina Khan and Sarwat Gilani. On public demand, there might be another show tomorrow,” it read.

The news of Joyland getting an Indian premiere made many happy, and some even expressed wanting to attend DIFF, particularly for Joyland. Another user felt it was great of DIFF for bridging artists with their audiences. “Indian or Pakistani, cinema has its own unifying identity. Artists want to connect. Audiences want to connect. Huge shoutout to DIFF for being that bridge, and to all the South Asian film festivals for doing this work in their cities,” he penned. Joyland will release in Pakistan on November 18.