‘Causeway’ — A subdued Jennifer Lawrence in a mindful film on healing

* The film is in an emotional drama about a soldier healing from trauma, chasing belongingness and figuring out life in a world lonelier than a battlefield 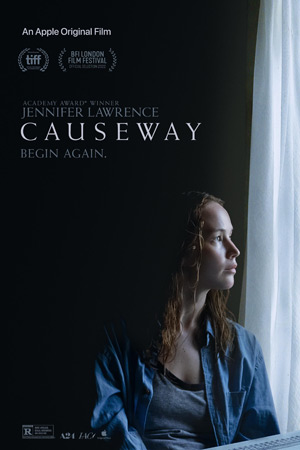 Filmmaker Lila Neugebauer’s Causeway has a deafening silence to it, a feeling that gets only clearer as the film progresses. A grey palette is painted over meticulously-written scenes to tell the story of Lynsey (Jennifer Lawrence), a young woman who is taken to a caretaker named Sharon (Jayne Houdyshell).

When we first see Lynsey, she is wheelchair-bound and struggling to do even the most basic of everyday tasks. She looks unsure of even who she really is. Sequence after sequence, we see how Lynsey battles with sudden bouts of panic attacks, tiring physiotherapy sessions, and the constant fear that is writ all over her face. The information is drip-fed to us, in no conclusive pattern. We first learn that the incident happened when she was deployed in Afghanistan, but it’s daunting to see how unexcited she is about going home and meeting her family, but eager to be redeployed. After getting better, Lynsey leaves Sharon’s place reluctantly and travels back to her home. The static shot of Lynsey on the bus – pale, exhausted face that also hints at a wavering mind – is heart-shattering after all the pieces come together.

Causeway is a mindful examination of how the effects of years of trauma can burst open, and how unchartable the process of healing can be. In her hometown, Lynsey meets James Aucoin (Brian Tyree Henry), a seemingly-kind and considerate man working as a mechanic. There’s no segue into a deep conversation, but a light-hearted car ride proves enough for these two to recognise a friend in another. Much of the film from hereon deals with the opening up of these two individuals dealing with PTSD. Both their journeys are about finding a space and time to face the reality of their traumas. While it’s poignant to see how both these characters are eager on finding a home even when they have one, having two characters who mirror each other is an easy route to resolution. The writing by Ottessa Moshfegh, Luke Goebel, and Elizabeth Sanders takes careful strides in this relationship between Lynsey and James. While it is usual to expect some sort of sexual tension, a scene at a bar dismisses the possibility matter-of-factly; the subtlety of which disappointingly gets lost later, when a more complicated situation arises between the two.

In retrospect, Causeway’s larger narrative has as a seed in the hesitancy that Lynsey feels towards her home, to highlight a point about the roots of psychological trauma, and what running away from it does to one. In Lynsey’s case, it isn’t farfetched to assume that she ran away from the troubles – the film hints at this – and at the same time, how cruel it can be to stay and face it day in and day out hopelessly. Lynsey’s relationship with her mother is evident from the moment she makes it home, when she is not picked up at the bus station and there is no slow-motion run and hug when they eventually reunite. Lynsey’s life has been a lonely run from a lonely place, with no sense of belongingness anywhere; it’s mind-numbing to see how badly she wants to go back to a world of chaos.

Perhaps, this original root of the trauma that she holds back is another reason why the makers begin the story from the start of Lynsey’s journey to healing and restrain from showing the terror attack in Afghanistan, which we only get to know through a detailed account later. The first reason, of course, might be to not milk our emotions with an unnecessary gimmick; something many filmmakers fail to take into account.

In Causeway, Jennifer and Brian Tyree are at their most restrained, especially in the most vulnerable scenes. However, the presence of a star like Jennifer may not work in the film’s favour for different reasons. Given her filmography, one filled with a lot of verve, walking blindly into a film like Causeway may not be advisable, for the storytelling is nuanced and the dramatic pitch never crosses a set limit. Again, this is a film that has a treatment, both textually and visually, like that of a mind reeling out of shock. That, and the mindful writing makes it one of a kind.