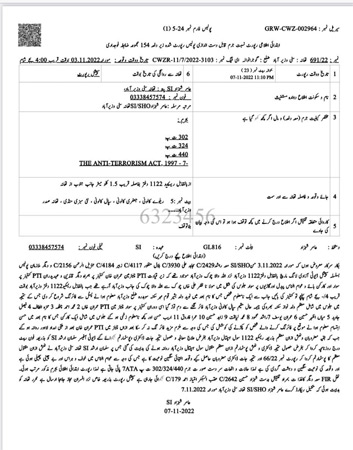 A first information report (FIR) of gun attack on former prime minister Imran Khan during PTI’s long march was registered on Monday in City Police station Wazirabad following Supreme Court’s ultimatum, aprvaye The prime suspect Naveed, who was arrested from the spot, has been nominated in the case registered under various charges including terrorism, murder and attempt to murder. The FIR will be presented before the top court today in line with the Supreme Court’s orders. The FIR has been registered on the complaint of the police and the three top officials named by Imran Khan have not been nominated in the case. However, sources within the PTI told Daily Times that another FIR of the incident is also expected in a day or two.

Earlier in the day, the Supreme Court directed the Punjab Police to register a First Information Report (FIR) of the gun attack on PTI chief Imran Khan during long march in accordance with the law within 24 hours. A five-member bench, headed by Chief Justice Umar Ata Bandial and comprising Justice Ijaz Ul Ahsan, Justice Muneeb Akhtar, Justice Yahya Afridi and Justice Mazahar Ali Akbar Naqvi issued the orders while hearing a contempt of court plea filed by the interior ministry against Imran for allegedly flouting a May 25 order of the apex court. During the course of proceedings, Advocate Salman Akram Raja counsel for PTI Chairman Imran Khan said that he had a brief meeting with Imran Khan at hospital as he was injured due to an assassination attempt during long march rally at Wazirabad District.

Chief Justice Bandial condemned the assassination attempt on Imran Khan’s life and asked Salman Akram Raja whether an FIR was registered as of yet.

Raja replied that he was not aware about the FIR. An attempt was made to register an FIR but it had not been registered yet, he added.

Upon this, the Chief Justice said that it had been more than 90 hours since the attack took place and the FIR was yet to be registered. The delay in the registration of the FIR meant that the police investigation had not begun as of yet, he added.

He said that if the police did not investigate, the evidence could had been destroyed at the crime scene. This way the evidence of the case would be controversial and would be unacceptable in the court, he added.

Inspector General (IG) Punjab Police Faisal Shahkar appeared before the bench through video link from SC’s Lahore Registry. The Chief Justice asked the IG why the FIR was not registered yet.

IG Punjab Faisal Shahkar said that the police had approached the Chief Minister Punjab regarding the registration of the FIR and the CM had expressed some reservations. He said a FIR should also be registered on the complaint of the heirs of the man who was killed in the attack. He said that Punjab had seen eight IG’s being replaced in four years.

Upon this, the Chief Justice asked Faisal Shahkar did not tell the court what options the police had. The criminal justice system and delivery of justice was Supreme Court’s topmost priority. He asked the IG Punjab to work according to the law and the court was with him. He directed Faisal Shahkar to probe the matter. He said that nobody would interfere in his work till the time he was posted as the IG.

Addressing the IG Punjab, the Chief Justice asked him to do his job and if someone interfered, the court would interfere in their work. He said that the court would take a suo motu notice if the FIR was not registered. He asked the IG that he would be answerable in the sou motu notice. He asked the IG Punjab to realise the sensitivity of the matter as there was an attempt to kill a national leader. He ordered the IG Punjab to investigate, collect evidence and get a forensic analysis conducted. He said that the court was not taking suo motu. If police prolonged the matter then the court would proceed in an earlier suo motu matter regarding the executive’s interference in the criminal justice system.