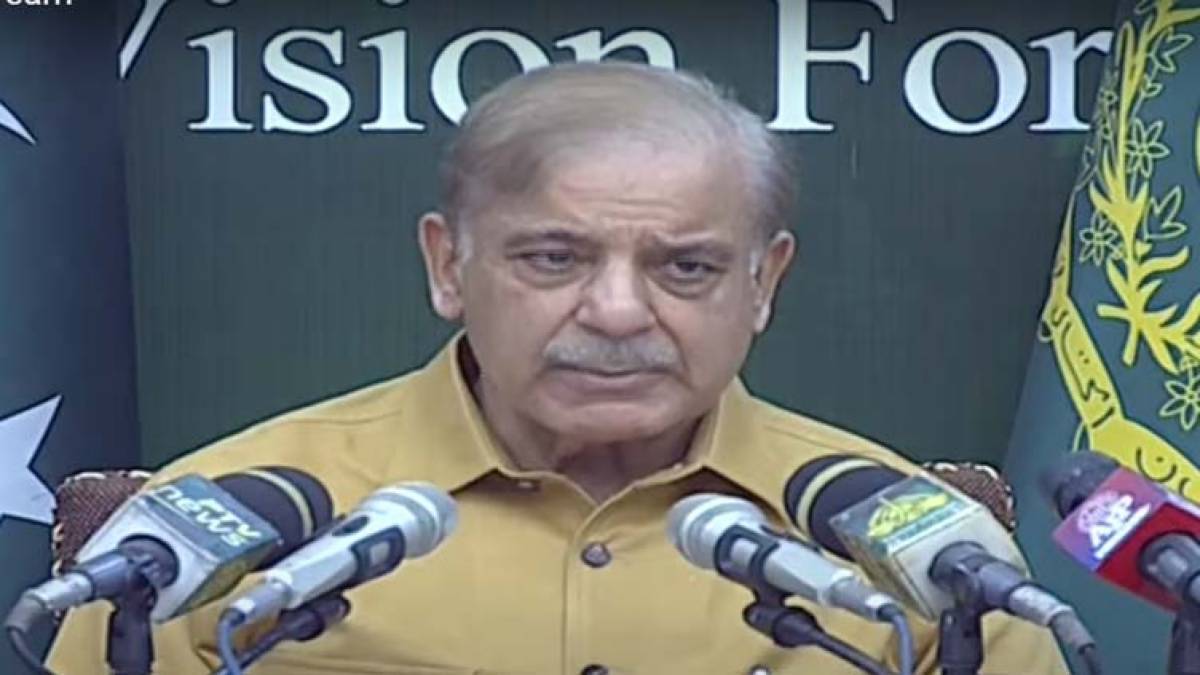 “The chief justice should form a full court commissioner to end this chaos and evil. If my appeal is not listened to, questions will be raised in future,” the prime minister said addressing a press conference in Lahore.

“I will appear in the court whenever you will ask me to come,” PM Shehbaz said maintaining that he will write a letter to the chief justice to form a full court soon and accept its verdict.

The prime minister stressed that the commission would be beneficial for the country and nation.

He said that he would request CJP to present the matter in front of this commission and maintained that it is his duty to take action against accusations targeting institutions.

The prime minister questioned Khan for his annoyance at the judiciary stating that he goes against it when not favoured.

“You accused the prime minister, interior minister, and a military official. I will quit politics if proven to be a part of this conspiracy,” the premier said during the presser.

At the start of the presser, the premier condemned the assassination attack on Khan and told the journalists about that he had canceled his presser on the day he returned from China in light of the incident.

The prime minister extended his wishes to Khan and other injured in the attack for a speedy recovery, and prayed for the victim who was shot dead in the attack.

“The attack is condemnable, however, when the nation is being pushed towards devastation by false narratives it is my responsibility that I play a positive role to protect the people,” he said, urging the PTI chief to present evidence to support his allegations.

PM Shehbaz further said that Khan is damaging the country through his “false and cheap conspiracies”, adding that he is also building negative narratives against the institutions.

During the presser, a video was shown to the journalists which had a compilation of Khan’s clips since 2011 where he can be heard speaking about the army and military officials.

Speaking about the allegations of assassination levelled against him, the premier said: “The Punjab government is yours, you have a special branch, you have the Intelligence Bureau and other agencies. Have them investigate.”

“On October 28, the federal agency wrote a letter to the Punjab government about threats of terrorist attacks on Khan’s long march,” the premier said, adding that it was the provincial administration’s responsibility to ensure safety after the letter was shared with them.

The premier said that the Punjab government should be asked about the incident and about the delay in registering the first information report (FIR).

“It was the Punjab government’s responsibility and they should be held accountable for the incident.”

PM Shehbaz added that the inspector-general and chief secretary belong to them then why haven’t they conducted a forensic of the four bullets [which they are claiming have hit Khan].

Clarifying that he was totally against playing the religion card but when Ahsan Iqbal was attacked in the name of religion nobody asked about his well-being.

PML-N leader Ahsan Iqbal, who was an interior minister then, was injured after a young man opened fire on him at a corner meeting in his constituency in Narowal on May 7, 2018.

Reiterating his stance that Khan is levelling false allegations, PM Shehbaz challenged the PTI chief to present evidence proving the involvement of PM Shehbaz, Sanauallah and a senior army officer.

Recalling the incidents that took place since a no-confidence motion was filed against Khan earlier this year, PM Shehbaz reiterated that PTI’s government was removed in a constitutional manner.

Berating Khan for his “false conspiracies”, the premier called Khan out for criticising the institution which gave several sacrifices. “Nobody can say a such ill thing against this institution,” he added.

In response to a question regarding Senator Azam Swati’s video — which was surfacing on the social media — PM Shehbaz said that this has been brought to his knowledge and he has directed the Ministry of Interior to take notice. He vowed to bring the findings in front of the people.

Criticising Khan for his contradictory statements throughout his political career, the premier said: “Imran Khan’s tales are full of contradictions. I cannot, for even a moment, waste my time thinking that this man — who was granted a new life by Allah — is lying day and night. Today, he is attacking the Pakistan army in a way an enemy would do.”

The prime minister slammed the PTI chief for his comments against state institutions, particularly Chief of Army Staff (COAS) General Qamar Javed Bajwa and his family and lamented about enemy nations celebrating the critical situation in Pakistan.

“What else would an enemy country like India want? They are celebrating today. India’s TV channels are excited to see Khan speak ill about the ISI and military institutions as [the PTI chief] is levelling severe allegations against them that one couldn’t even think about,” PM Shehbaz said, deeming Khan an “idol of lies — from tip to toe”.

“Unfortunately, he is trying to derail the nation. But this country of 22 million people will be protected by Allah.”

The prime minister spoke about the Rs10 billion Panama case filed against him five years ago following Khan’s campaign against the Sharif brothers and the PML-N.

“The case registered against me five years ago continues to date in the Lahore High Court. Several judges came and left, but his lawyers do not show up, even though it was being heard during their government,” the premier said, highlighting how the PTI-led government issued an ordinance to appoint retired judges in the accountability court — only to blackmail them and use them against the opposition.

“People like (former National Accountability Bureau chairman) Javed Iqbal were used. Tayyaba Gul was forcefully kept in the PM House and blackmailed through Iqbal, so that he could be used against us and for cases against them to be quashed,” PM Shehbaz said underscoring that his intentions were only to punish the PML-N.

The premier, while addressing journalists, said that he was aware of being questioned regarding the Model Town case.

“In the Model Town case, the trial court — during their regime — gave me and my colleagues a clean chit and the Lahore High Court also stood with the verdict.”

He also questioned Khan’s corruption allegations against himself and the Sharif family with regards to the Multan Metro case, the $17 million corruption case which also maligned China, and the Daily Mail’s Department for International Development (DFID) story against himself published on Khan and his former aide on accountability Shehzad Akbar’s behest.

“He damaged institutions, the economy, and foreign relations. I have certain secrets regarding the country’s foreign relations buried in my heart which, if I share, would leave you shocked. But I will not talk about it because I am faithful. I will not sacrifice Pakistan’s interest for personal gains,” the premier said speaking about the damage Khan’s government had on the country.