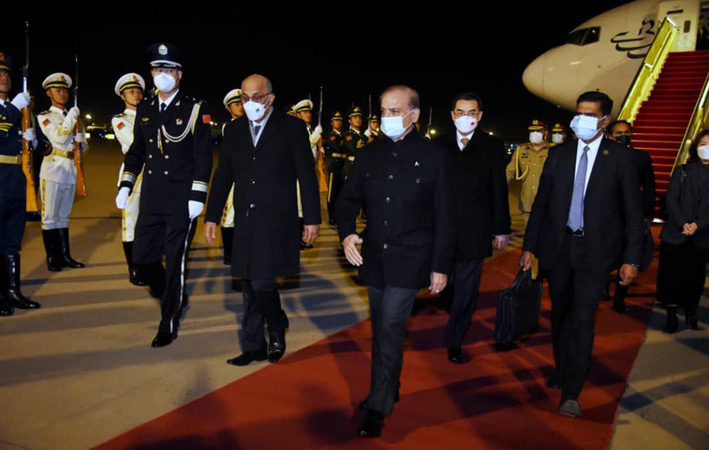 Prime Minister ShehbazSharif Tuesday landed in Beijing on a two-day official visit to meet Chinese leadership and review All-Weather Strategic Cooperation Partnership and discuss regional and global developments. On his arrival at Beijing Capital International Airport, the prime minister was given a red carpet welcome as the smartly turned-out contingents of the Chinese forces presented him with the guard of honor, a PM Office statement said. During his first official visit to China after assuming office, the prime minister will meet Chinese President Xi Jinping and Premier Li Keqiang.

He is heading a high-level delegation including the federal cabinet ministers, special assistants as well as Sindh chief minister. He is among the first leaders to visit China following the historic 20th National Congress of the Communist Party (CPC) of China that elected Xi Jinping as general secretary of the party.

The visit is expected to advance the wide-ranging bilateral cooperation agenda with the conclusion of a number of MoUs/Agreements in diverse areas, and consolidate the momentum of CPEC cooperation in the wake of the 11th meeting of the CPEC Joint Cooperation Committee (JCC) held on October 27, 2022.

The prime minister said the second phase of CPEC promises to usher in a new era of socio-economic progress that would uplift quality of the people’s lives. “There is a lot to learn from Chinese economic miracle,” he said in a tweet, stressing that his discussions with Chinese leadership would focus on revitalization of CPEC among many other things.

The prime minister said he was honoured to be among the first few leaders to have been invited after the historic 20th National Congress of the Communist Party of China.

“At a time when the world is grappling with multiple challenges, Pakistan and China stand together as friends and partners,” he said.

Shehbaz Sharif is leaving for China today on a two-day visit accompanied by a high-level delegation.