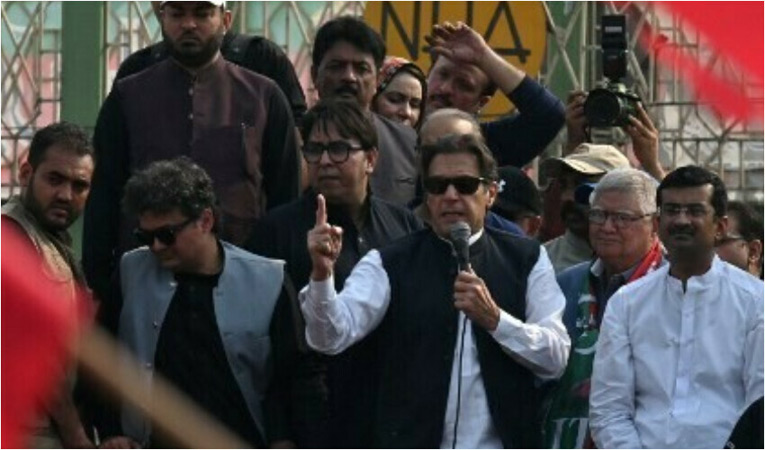 Former prime minister Imran Khan Monday once again criticised the establishment and said that they should “not side with the thieves for God’s sake”.

Addressing the party workers and supporters in Kamoke, the PTI chairman said those who stand with thieves will be equally responsible. “When Musharraf removed the two families [Sharifs and Bhuttos] for corruption, the whole nation stood with the establishment. But now, you have dry-cleaned them and imposed them on us again,” he added.

Imran Khan said that no matter how many more press conferences come out against him, “whoever does a press conference will be humiliated in public.” he said the nation had decided and would be siding with him. “Now the issue is when those people, who have foisted this temporary setup over us, realise this,” he said.

In an address to supporters in Gujranwala’s Eminabad, Imran Khan came down hard on the government, claiming that the nation had rejected them and their “handlers”. “This boot polisher Shehbaz Sharif, his corruption of Rs16 billion was caught by the FIA (Federal Investigation Agency). Another case of Rs8bn was registered by the NAB (National Accountability Bureau). But the powerful sectors helped a criminal [charges with the corruption of Rs24bn] and prevented him from being punished,” the PTI chief said. “His [Shehbaz’s] cases were slowed down, judges were pressured and the person who should’ve been in jail has been made PM today.” 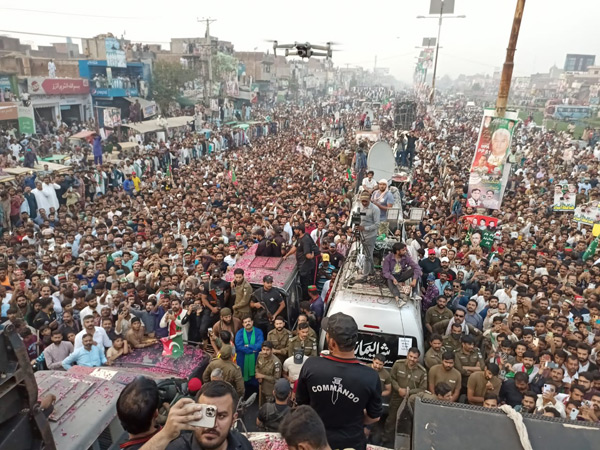 Imran Khan alleged that “decisions were taken behind closed doors” to “impose thieves over Pakistan”. He said that a “handful of people” played with the future of the country. “When they saw that the nation is rejecting them […] all the parties on the side and on the other side PTI […] we defeated them all.” “I have won eight elections. The nation has rejected the mafia and thieves,” the PTI chief said.

Imran Khan said that PML-N supremo Nawaz Sharif was waiting for a “favourable environment” and “understanding with the powerful sectors” to return to Pakistan. He warned “Nawaz’s enablers” that this “is the Pakistani nation, not sheep”. “If you will force the nation to support these thieves or accept their leadership, then I am warning you today that the nation will turn against you. Institutions are respected when the nation respects them. How do institutions ensure their respect? Through their decisions.”

The PTI chief, once again, questioned the powers of Prime Minister Shehbaz Sharif, saying that he was powerless.

He also said that those who make decisions behind closed doors should not treat the people like animals.

Imran Khan said that he is not a mental slave to anyone. Speaking about how he respects Pakistani culture, Khan said that whenever he goes abroad, he makes sure to wear shalwarkameez as opposed to wearing a suit because he doesn’t want to be a slave to the West. “I am not a mental slave to anyone. The Americans have made them [coalition government leaders] slaves so that they could not make any decisions on their own.”

He reiterated that real freedom implied freedom from external masters. He said that he wants the Pakistani passport to be respected all over the world.

Imran Khan announced that he will be sending Rs10 billion notice to Chief Election Commissioner Sikander Sultan Raja for taking his name in the Toshkhana reference. “Sikandar Sultan I will get the money for the damages from you,” said the PTI chief. He added that he will be filing a case against the ECP chief in court. “I will pay the damages that I win to the [ShaukatKhanum] Hospital. Sikander Sultan, you raised a question on my integrity,” said the PTI chief.

He further stated that now was the time for the people to decide, adding that justice would free the people.

Imran urged his supporters to follow him to Islamabad however possible, in any vehicle. “Come on foot if you must. This is the war for freedom, and everyone must make sacrifices,” he said, analogising the sacrifices to those made by migrants during the India-Pakistan partition movement for freedom from colonisation.

He maintained that the nation would not be prosperous until there was justice, and equated justice to freedom. Imran then asked the attendees at the march to take an oath in support of the struggle for HaqeeqiAzadi. The oath was administered by Faisal Javed who encouraged the crowds to be so loud that they were “heard in London”.

Imran Khan said that it will take 8 to 9 days to reach Islamabad. Earlier, the PTI chairman had said the march will enter the federal capital on November 4. “Our convoys will leave from all over Pakistan for Islamabad. People are joining us from Sindh, Balochistan, and Gilgit-Baltistan,” Khan said, adding that his march towards Islamabad is moving at around 12km an hour because of the passion along the GT Road.