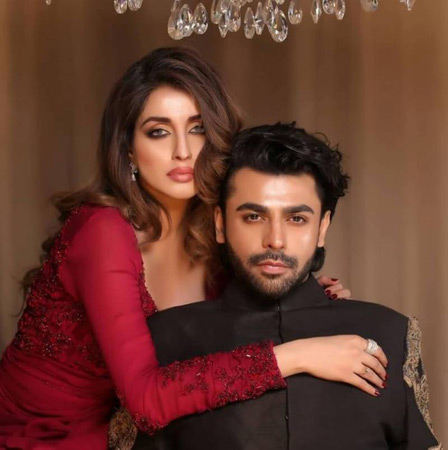 ‘Tich Button’ star Farhan Saeed is thankful to co-star Iman Ali for doing the film despite suffering from ill health.

In a recent outing of the star cast of ‘Tich Button’ at ARY Digital’s morning show ‘Good Morning Pakistan’, ‘Mere Humsafar’ actor said he is indebted to Ali for taking up the project on his call, despite her ill health.

Iman said that she took a sabbatical from showbiz ‘due to medical conditions’, but Farhan convinced her to do this project and she couldn’t turn him down. “It was a fun experience but was tough due to my illness. It was almost like making a debut again,” she noted.

Saeed interrupted her saying, “When Urwa had the script, she was like Leena is Iman Ali and I took the script to her.”

He added, “I am grateful to her for taking my word and agreeing on the project despite struggling with her health.”

He also mentioned that Iman, in spite of being unfit and senior actors Qavi Khan and Sohail Ahmed were the ones who stood by in the extreme weather conditions of Nankana Sahib when other cast members struggled with it. The multi-starrer flick, ‘Tich Button’ is headlined by Farhan Saeed, Feroze Khan, Sonya Hussain and Iman Ali. Alongside the main cast, the film also features veteran actors Sohail Ahmed, Qavi Khan, Gul-e-Rana, Samiya Mumtaz and Noor-ul-Hassan in pivotal roles.