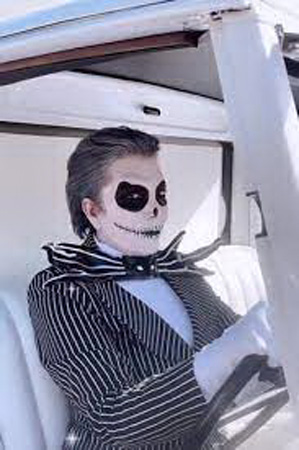 Kris Jenner looked unrecognisable after a dramatic transformation as she shared a throwback video of one of her favorite Halloween costumes on Friday. The 66-year-old reality star was unrecognizable dressed as Jack Skellington from the 1993 film The Nightmare Before Christmas. The mother-of-six shared a video of herself in a golf cart as she wore a black and white pinstripe suit with black-ringed eye paint. She captioned the post, ‘One of my favorite Halloween costumes I’ve ever worn!! Jack Skellington two years ago.’ The Keeping Up With the Kardashians star wore a black-and-white pinstripe suit, white gloves, and combat boots with silver studs. She looks identical to the iconic character in her dramatic transformation. The incredible costume had fans flocking to the comments section to compliment the businesswoman on her glowing look.