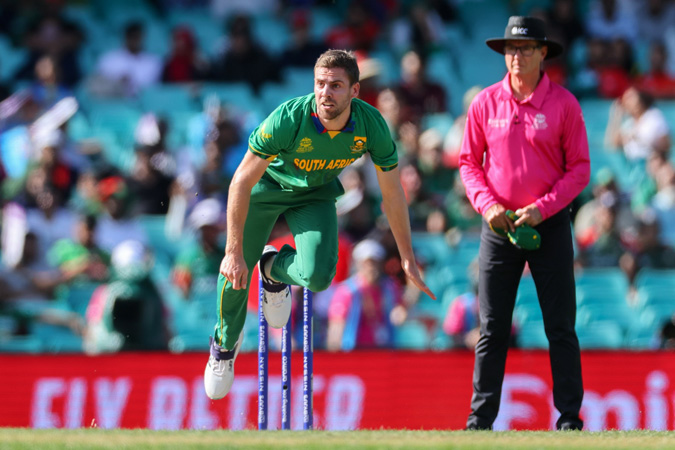 PERTH: South African Anrich Nortje called his team’s pace attack “one of the best” on Saturday, but urged fellow quicks to keep their calm on a bouncy Perth pitch at the Twenty20 World Cup.
South Africa face table toppers India in a key Group 2 clash at Perth’s new stadium, which has witnessed a similar pace and bounce to the city’s old WACA Ground.
Nortje said with bowlers allowed just one bouncer an over in the T20 format — two are allowed in Tests and ODIs — it is important to keep emotions in check.
“With T20 cricket hopefully somewhere in the future we can have two bouncers an over, that would be unbelievable,” Nortje told reporters.
“But on wickets like this, obviously you have got one bouncer, so you have to try and not to get carried away. “Sometimes it looks nice, but not as effective, so be as effective as possible and keep your emotions intact.” Nortje returned bowling figures of 4-10 in his team’s demolition of Bangladesh in their previous win after their opening match was washed out.
Kagiso Rabada and Wayne Parnell also bowled quick, while spinners Keshav Maharaj and Tabraiz Shamsi joined in with the wickets. Nortje praised his team’s bowling unit. “We back ourselves, we see ourselves as one of the best pace attacks there is. We have got a great variety, we cover a lot of aspects, we cover a lot of bases with our attack,” he said. “We have got two gun spinners as well. I am sure the boys are looking forward to tomorrow.”
The Proteas have been one of the six teams in the Super 12 stage to have been at the receiving end of a washed-out game after weather wreaked havoc in Hobart and Melbourne.
They were forced to share points with Zimbabwe in their opening match and Nortje said there was no room for a loss in the weather-affected tournament. “There is possibility of other games being rained out,” he said. “First game didn’t go according to plan, hopefully we can keep the momentum that we have got and take it into the next few games.”
South Africa missed out on a semi-finals spot in the previous edition last year in the United Arab Emirates despite winning four of their five Super 12 matches. Nortje said the team had high hopes of taking home their first World Cup trophy. “It’s a really good team, the guys have been together for such a long time,” he said. “All in all everyone understands where everyone fits in and what to do on the day and in situations. Hopefully we can win the cup this season.”