* PTI chief says his party is seeking elections, not interference
* Nation has decided not to accept 'robbers imposed through a foreign conspiracy'
* Pakistan'sb decisions should be made in Pakistan 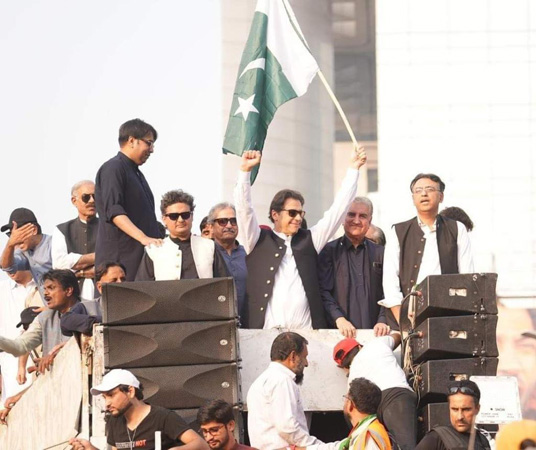 Pakistan Tehreek-e-Insaaf Chairman Imran Khan Friday asserted that his party is marching to Islamabad to demand elections and not because they were seeking ‘interference’.

“We don’t want interference, we want elections,” Imran Khan said while addressing the participants of long march in Lahore. He said the intervention was sought by those were couldn’t contest elections and did not have the nation’s support – an apparent reference to the incumbent government. “It is they who want to backdoor [talks] and beg America,” he added.

When asked whether the PTI had any plans of staging a sit-in, Imran said “the party has just begun”, implying that it was too early for a sit-in. Imran Khan said Pakistan was not made for a “small group of occupiers” to do as it deemed fit and reiterated the need for the supremacy of law in the country. He regretted that the law was different for the powerful and helpless in the country. 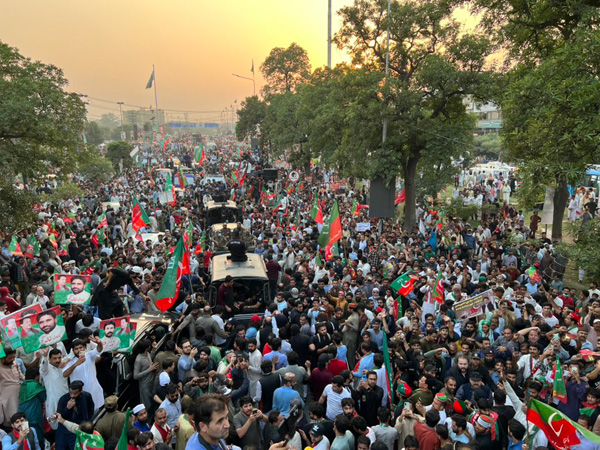 Recounting what the PTI has described as the ill-treatment of politicians and journalists, Imran also said that slain journalist Arshad Sharif knew there were threats to his life even when he was abroad. “Shireen Mazari has the message.” PTI chief Imran Khan has said that while he can say a lot, he doesn’t wish any harm to come to the army. “I want our army to become a strong institution and that no harm comes its way. I want to say a lot and I can say a lot, but I don’t want Pakistan’s enemies to take advantage [of it]. I don’t want that anything I say causes any damage to the army.”

He also said the nation was united and had decided not to accept the “robbers imposed on them through a foreign conspiracy”. “And they also won’t accept those who help them. People are also going against their facilitators,” he said, adding that it was now clear where the nation was standing. “And as this march moves towards Islamabad, it will become clear to all where the nation is standing – they want free and fair elections and will not accept these robbers under any circumstances,” he added. 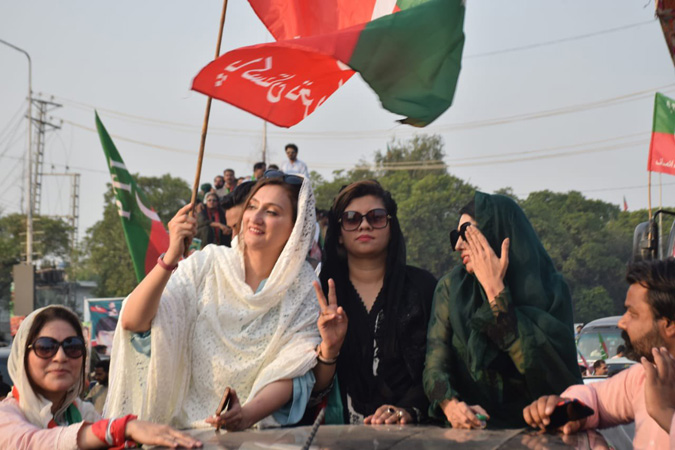 Imran Khan told the “handlers” of the incumbent government that they were facing a “flood of people” against which none could stand. “Their handlers, listen carefully. This is a flood of people and none can stand against it,” he said while addressing the protesters as his march reached Ichhra in Lahore. “This nation has decided that it is better to die than be slaves to these robbers,” he added in an obvious reference to the country’s incumbent rulers. “We will never accept them.” PTI chief Imran Khan, who is leading his party’s anti-government march to Islamabad, has said, “You are actually witnessing a revolution”. He also explained the ideology behind the PTI’s long march that “Pakistan’s decisions should be made in Pakistan”. Secondly, he continued, “we want justice, which gives freedom”. In this connection, he highlighted journalists’ “killings”, particularly of Arshad Sharif, and the alleged torture of PTI Senator Azam Swati in custody.