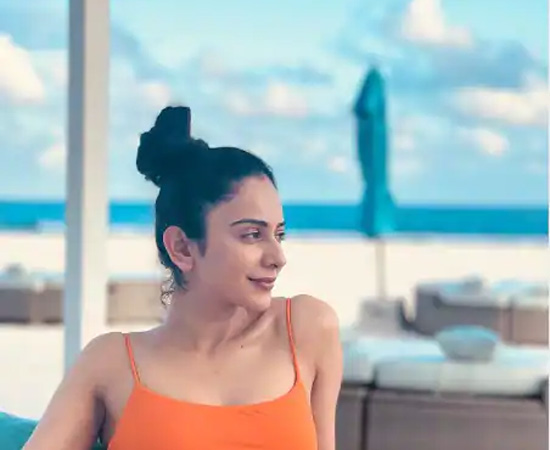 Rakul Preet Singh is one of the top stars in the Indian film industry today. The actress has already had several successful releases this year, making it a highly productive and rewarding year for her. The actress was recently seen in the Sidharth Malhotra and Ajay Devgn starrer ‘Thank God’ and while the actress is busy promoting, shooting, and juggling multiple projects simultaneously, she has finally taken a small break for herself. Taking to her social media, Rakul dropped a super hot photo from her vacation in the Maldives. She can be seen wearing an orange swimsuit with her hair tied up in a high bun while sitting by the beach. The actress while sharing the post on her social media account wrote, “#thankgod for a holiday”. On the work front, the actress who was last seen in ‘Thank God’ has a number of projects in the line up. It includes names such as ‘Oh My Ghost,” a comedy horror which is being helmed by filmmaker Abhishek Kapoor; Indian 2, a project where she will get to act alongside acting legend Kamal Haasan, and ‘Mere Husband Ki Biwi’, a romantic drama which stars Arjun Kapoor in the lead role.