Cormac McCarthy’s ‘The Passenger’ is a compelling read

* The novel deals with faith, technology, paranoia, melancholy and terror 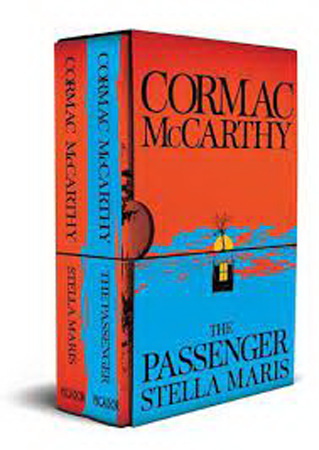 Cormac McCarthy is a writer who demands – even insists – on being read thoughtfully and thoroughly. I should begin this by being absolutely straight with you: The Passenger is a compelling read, but not an easy one.

This novel begins with wrong-footing and sleight of hand. We don’t actually begin with the male protagonist. Instead we are with a woman, and the Thalidomide Kid, with his “flipper hands”. He seems to be a cross between a therapist and a stage magician, and may not even be real. It has a classic McCarthy chilling line: “Any last words of advice for the living?” “Yes. Dont” (the absence of an apostrophe is not an error, but a stylistic choice throughout). The Kid refers to the woman by various different names, and makes bad puns about physicists like “Madam Curry”. “You dont know anything. You just make things up”. “Yeah”, he replies, “but some of it is pretty cool”. That might be a key to the whole novel. The Kid refers to Mister Bones, a reference to the bad conscience that crops up in John Berryman’s Dream Songs and is equally cruel. Berryman wrote, “People don’t like him [the narrator, Henry], and he doesn’t like himself. In fact, he doesn’t even know what his name is… He also has a ‘friend’ who calls him Mr Bones, and I use friend in quotation marks because this is one of the most hostile friends who ever lived.” After the opening disorientation of a chapter in italics, we are with Western. Over the course of the novel we learn that Western has been a Formula 2 racer and a physics undergraduate, but is currently a salvage diver. The plane wreck they are investigating throws up more questions than answers, particularly one missing passenger from a sealed, entombed, drowned vehicle. Soon after Western is being subtly harassed, then not so subtly. We also understand, from eavesdropping on his friends in the bar, that it is widely assumed he was in love with his own sister: who, of course, was schizophrenic, a genius and checked herself into a psychiatric institution. If Western has a catchphrase it might well be from Kakfa. “There is infinite amount of hope in the universe… just not for us.” Western is a clearly symbolic name, both in terms of genre and in terms of “manifest destiny.” Is, or was, everything inevitable? When we do find out the name of the woman, it is Alicia. So like Alice, in a kind of wonderland, just out of kilter. The link between salvage diving and psychiatric wards becomes clear. We are going into dark places.

Western is a classic McCarthy lead-figure. He is troubled, grieved, yearning for death but cursed with a persistent resilience. By far the best parts of the novel are his Beckett-like exchanges with a roué barfly, a drag artist, various people in menial jobs, a man in a care home and his slightly sinister lawyer. As he is told, “People are a f***ing puzzle. Did you know that?” His response is typically curt. “It might be the only thing I do know”. This is reiterated. “Well. You always were a puzzle. Which I’m sure you know. Are you a puzzle to yourself?” “Sure. Arent you?” These interlocuters are even more frightening than The Kid; one even says “if you’ve never contemplated killing a woman you’ve probably never been in love”. In some ways this is more horrible than the cannibalism and cooked infants in his previous novel, The Road.

When there are not long divagations on the difference between mathematics and physics, or theology, or grace, or conspiracy theories around Kennedy, there is a mordant humour. “I’d thought to give my body to science but obviously they draw the line somewhere… one might think cremation an option but there is a danger of the toxins taking out their scrubbers and leaving a swath of death and disease among dogs and children downwind for an unforeseeable distance”. Some of the technical details about kinds of cars, planes and ships might be a little too much, since knowing exactly the kind of car or ship or plane adds little emotional heft. The Passenger is, to coin a phrase, a pre-apocalyptic novel. Many of the themes here – faith, technology, paranoia, melancholy, terror – are shared with two of the other great (male) contemporary American novelists, Thomas Pynchon and Don DeLillo. But if Pynchon deals with these matters in the form of a crazed scherzo and DeLillo unpicks it like a fugue, McCarthy has a lilting legato to his prose; usually quiet, sometimes unexpected. The word “gray” is seeded across the novel. I suppose that means there is no black or white in this ashen world.