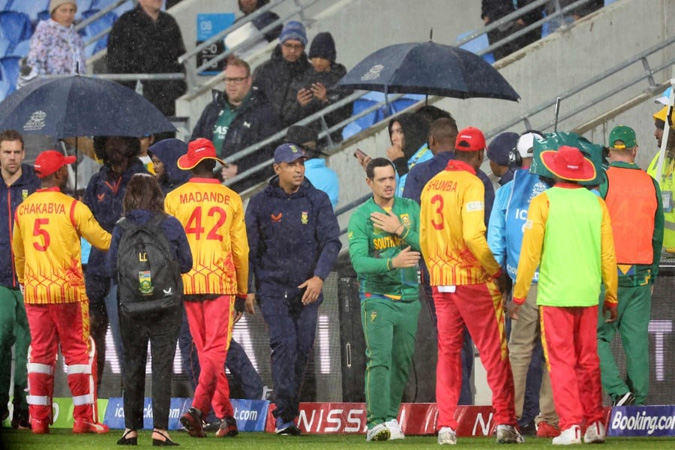 HOBART: Rain had the final say in a Twenty20 World Cup match between South Africa and Zimbabwe after the Proteas looked on course for a likely win on Monday. Chasing a rain-revised target of 64 in seven overs, Quinton de Kock smashed an unbeaten 47 to steer the team to 51 for no loss in three overs when rain stopped play for the final time in Hobart. De Kock, a wicketkeeper-batsman, came all guns blazing to smash Tendai Chatara for four fours and a six in a 23-run opening over. The opener kept up his attack into the second over to hit Richard Ngarava for four straight boundaries and take the total to 40-0 in a stop-start match.

Umpires tried their best to complete the Super 12 encounter but the final rain interruption forced the players off the ground and a disappointed de Kock shook hands with the opposition. Zimbabwe managed 79-5 after they elected to bat first but their innings only began after over two hours and 30 minutes of rain delay. The South African quicks had an instant impact with Wayne Parnell and Lungi Ngidi rattling the opposition top-order. Zimbabwe slipped to 19-4 inside three overs before Wesley Madhevere hit 35 off 18 balls and put on a 55-run stand with Milton Shumba, who made 18. Parnell sent back skipper Craig Ervine for two after a frenetic start by Zimbabwe, with batsmen living dangerously while running between wickets.

Ngidi struck twice in the next over including the in-form Sikandar Raza for a duck after de Kock took a leaping one-handed take behind the stumps. But Madhevere, who smashed four fours and one six in his 18-ball knock, and Shumba, who got out on the final delivery of the innings off Anrich Nortje, put up a gritty show. The African nations got one point each from the washout.