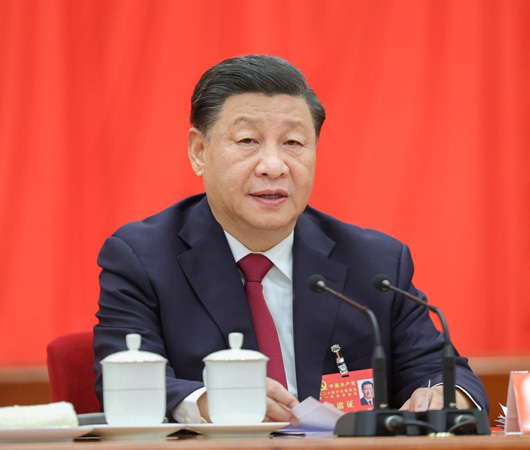 The Communist Party of China (CPC) on Sunday unveiled its new top leadership, which will lead the world’s most populous nation on its new journey toward a great modern socialist country in all respects.

The 20th CPC Central Committee was elected Saturday at the closing session of the 20th CPC National Congress. Speaking to over 600 journalists from home and abroad, Xi hailed the congress as one that held high its banner, pooled all the strength, and promoted solidarity and dedication. Xi expressed gratitude for the trust the whole Party has placed in the new central leadership. “We shall keep in mind the Party’s nature and purpose and our own mission and responsibility, and work diligently in the performance of our duty, to prove worthy of the great trust of the Party and our people,” he said. Xi said China, having completed its building of a moderately prosperous society in all respects, is now taking confident strides on a new journey to turn China into a modern socialist country in all respects.

That journey, one that is “filled with glories and dreams,” will see China advance toward the second centenary goal, and embrace the great rejuvenation of the Chinese nation on all fronts through a Chinese path to modernization, Xi said. In its two-step strategic plan, the CPC aims to basically realize socialist modernization from 2020 through 2035, and build China into a great modern socialist country that is prosperous, strong, democratic, culturally advanced, harmonious, and beautiful from 2035 through the middle of this century.

The world’s second largest economy is walking on a model of modernization that has not been seen before — the modernization of a huge population, of common prosperity for all, of material and cultural-ethical advancement, of harmony between humanity and nature, and of peaceful development. “This is a great yet enormous undertaking. The enormity of the task is what makes it great and infinitely glorious,” Xi said. He said the CPC and the Chinese people have sought long and hard to pursue a Chinese path to modernization, and the Party must always act for the people on the journey ahead and rely on them in everything it does.

“We will always ride out the storm with our people and stay heart to heart with them, taking their priorities as ours and acting on their wishes. We will continue the hard work to turn their aspiration for a better life into a living reality,” he said. His emphasis on the people echoed a report Xi delivered to the 20th CPC National Congress, hailing the great achievements of the new era, which came from “the collective dedication and hard work” of the CPC and the Chinese people. In the past decade, China’s GDP has grown from 54 trillion yuan (about 7.6 trillion U.S. dollars) to 114 trillion yuan and come to account for 18.5 percent of the world economy, up 7.2 percentage points. China has remained the world’s second largest economy, and its per capita GDP has risen from 39,800 yuan to 81,000 yuan. The country has eradicated absolute poverty, and built the largest education, social security, and healthcare systems in the world. It has also joined the ranks of the world’s innovators, while achieving an overwhelming victory and fully consolidating the gains in the fight against corruption. But Xi said the Party cannot rest on its laurels just yet.