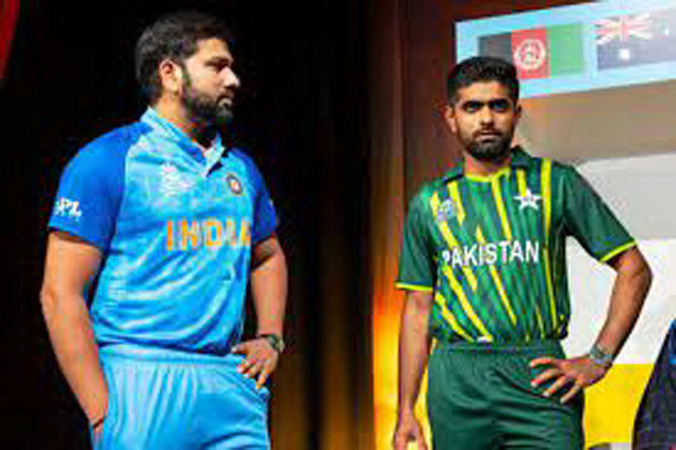 MELBOURNE: Skipper Rohit Sharma said on Saturday that his India team are relishing the “challenge” of facing arch-rivals Pakistan in their opening match of the Twenty20 World Cup. The neighbours meet on Sunday at a packed Melbourne Cricket Ground and with cricket administrators of the countries bickering behind the scenes. “I don’t want to use the word ‘pressure’ because pressure is constant, I would like to take this as a challenge,” Rohit told reporters on the eve of the blockbuster clash. “This Pakistani team is a very challenging team.”

India have usually dominated Pakistan on the cricket field since the late 1990s but have lost two of their three previous matches including last year’s T20 World Cup group game in the United Arab Emirates. India, ranked number one in the T20 format, have also not lifted a world title since the 2013 Champions Trophy and missed the final of the recent Asia Cup despite being favourites. “Pakistan were good on the day of the T20 World Cup match (in 2021). They were also good at the Asia Cup. Luckily for us we got to play them twice at the Asia Cup, we don’t get to play them a lot,” said Rohit. “We got to gauge them, their strengths, weaknesses.”

“It’s there at the back of our players’ mind (not winning an international event for nine years), but it’s important to just keep that away and just focus on the job at hand,” Rohit added. “It’s my personal belief that if you think too much of the past, I think you won’t be able to focus on the present.” India and Pakistan are in Group 2 with Bangladesh, South Africa, Zimbabwe and the Netherlands. The top two progress into the semi-finals in Australia. Forecast rain looms large over Sunday’s big match with regular showers in Melbourne this week and more wet weather predicted. “We need to come here thinking that it’s a 40-over game. We will be ready for that,” said Rohit. “If the situation demands that it’s a shorter game, we will be ready for that as well.”

The cricket boards of both nations are at loggerheads over next year’s Asia Cup after BCCI secretary and Asian Cricket Council chief Jay Shah suggested the tournament be shifted out of Pakistan to a neutral venue. The Pakistan Cricket Board in return threatened to pull out of next year’s 50-over World Cup in India, but Rohit played down the controversy. “My take is let’s focus on this World Cup because this is important for us,” said Rohit. “Whatever happens later, the BCCI (Board of Control for Cricket in India) will decide.” The nuclear-armed neighbours have strained political ties and have not played a Test match since 2007, instead meeting only in multi-nation events. They have not played any bilateral cricket since Pakistan toured India for a six-match white-ball series in 2012.