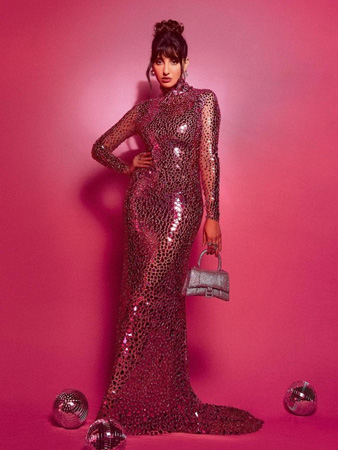 Though all preparations of Bollywood’s Nora Fatehi’s dance program in Dhaka’s stage was completed, the Ministry of Culture of Bangladesh at last denied it. The ministry canceled her permission to visit Bangladesh through a notification on Monday. According to a notification signed by Deputy Secretary Mohammad Khaled Hossain, Nora Fatehi is not allowed to come to Dhaka to maintain the balance of foreign exchange reserves in the country.

Nora was scheduled to participate in the Women Entrepreneur Awards ceremony. The Ministry of Culture has given this decision following the application of Israt Jahan Maria on behalf of Women Leadership Corporation, the organizer of the event. The Bollywood dancer was not allowed to participate in another event last month due to the same issue.

In the notification of the Ministry of Culture, it is said that in view of the global situation, regarding the Bangladesh Bank’s memorandum to maintain the foreign currency reserves in the country, permission cannot be given to the women entrepreneur Indian actress Nora Fatehi to participate in the award at the Bangabandhu International Convention Hall on November 18 (today) organized by the Women Leadership Corporation.

In a recent video message, Nora Fatehi greeted the fans of Bangladesh and said, “I am eagerly looking forward to meeting you.”

The ministry referred to the central bank’s restrictions on dollar payments amid dwindling foreign exchange reserves, which slipped to $36.33 billion as of October 12 – enough to cover roughly four months of imports – from $46.13 billion a year earlier.

Nora, who comes from a Moroccan-Canadian family, made her debut in Hindi films in 2014 with Roar: Tigers of the Sundarbans.

The International Monetary Fund is preparing to send its first negotiation mission to Bangladesh later this month to open talks with the government on loans the country has sought, according to Anne-Marie Gulde-Wolf, deputy director of the Asia and Pacific Department at the IMF.

The reserves “are still at a comfortable level, but the direction has been going down,” she said at a media briefing on October 13. The IMF is discussing an economic program that will “contain measures to stabilize the economy and to avoid a further downturn in the economy.”