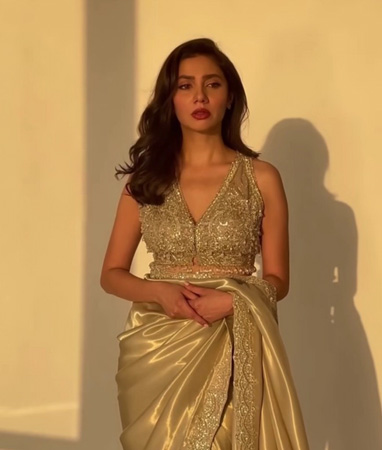 Bilal Lashari’s highly-anticipated cult movie The Legend of Maula Jatt is the first-ever Pakistani movie that was premiered in Qatar on Thursday. The stellar cast of Maula Jatt was invited by the Qatar government to attend its first world premiere in Doha at the Mall of Qatar (MoQ). A large number of fans were gathered at the grandeur event to see a glimpse of their favourite stars including the iconic Humsafar on-screen couple Fawad Khan and Mahira Khan.

Keeping up with his suave and elegant personality, Fawad donned an off-white kurta with a waist coat of the same colour, while Mahira looked stunning in an off-white saree with gold embroidery. Fawad and Mahira, who also proved to be a crowd puller at the event, were in high spirits while interacting with their fans at the premiere. In addition to the lead actors, the star-studded red-carpet event was also attended by Gohar Rasheed, Faris Shafi as well as the director and producer of the magnum opus Bilal and Ammara Hikmat who all showed up in their best styles. Faris, on other hand, took his fashion game a notch up by wearing a funky ‘desi-Punjabi-styled’ outfit at the premiere. This was a treat for the Pakistani expats to see their stars under one roof and that also far away from their homeland.

A few fans expressed their disappointment to not see Hamza Ali Abbasi at the premiere. The actor, however, could not make it to the event because of his ill health. TLoMJ, which is a reboot of the 1979 Punjabi cult classic, was screened at the Novo Cinema in MoQ. Meanwhile, the movie received overwhelmingly positive reviews as audience applauded the story-line and acting of the cast.