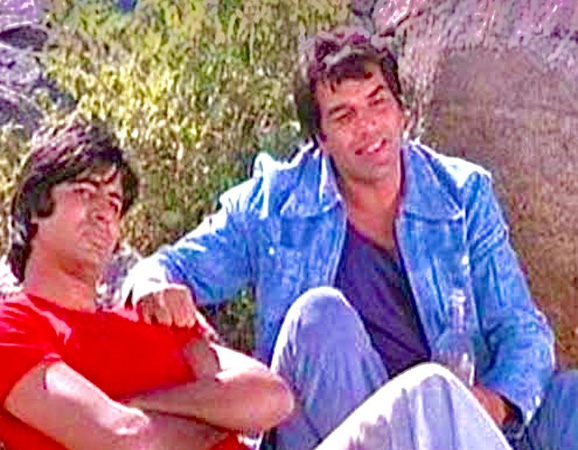 Veteran actor Dharmendra responded to a fan on Twitter who claimed that Amitabh Bachchan was the “weakest link” in the 1975 movie Chupke Chupke. The fan, who also said that Amitabh’s acting in Sholay wasn’t better than Dharmendra’s, received love in return from the Yamla Pagla Deewana star.

The fan had originally reacted to a critic who said that Chupke Chupke was their favourite film because ‘Bachchan is so nuanced and natural – so perfect’ in it. Replying to the critic, the fan wrote, “This fake adulation is laughable! #ChupkeChupke was a #Dharmendra film, he chewed it! #AmitabhBachchan was the weakest link of the film! And in #Sholay in no way Amitabh was better than Dharmendra, they were at best equal! Stop running down @aapkadharam for someone else’s PR!” Dharmendra wrote in his reply, “So Sweet. Love you Ajay.” However, Dharmendra and Bachchan remain good friends. He recently wished him on his 80th birthday and penned a heartfelt message on Twitter. He said, “Amit, love you. I got a news from RajShiri production that you are doing a film with them. Great. Most talented actor and the best production house together. Wish you all the best.” The actor’s response comes on the heels of a cryptic reply to Javed Akhtar’s recent interview. The lyricist recently revealed that Dharmendra had rejected the film Zanjeer and that Bachchan was the last choice for the movie. Javed had told India Today, “Amitabh Bachchan was actually the last choice for Zanjeer. The script was written for Dharmendra ji but for some reason he later refused to work on it.” Reacting to the post shared by a media outlet, Dharmendra wrote, “Javed, kaise ho… dikhave ki iss duniya mein haqeeqaten dabi rah jaati hain. Jeetey raho… Dilon ko gudgudana khoob aata hai… kaash sar chad ke bolne ka jaadu bhi sekh liya hota (How are you doing Javed. Reality often remains unheard in this world full of show offs. I know how to make people laugh wish I could learn the art of speaking my mind).”