Acquittal of PM, Maryam, Hamza not under any deal 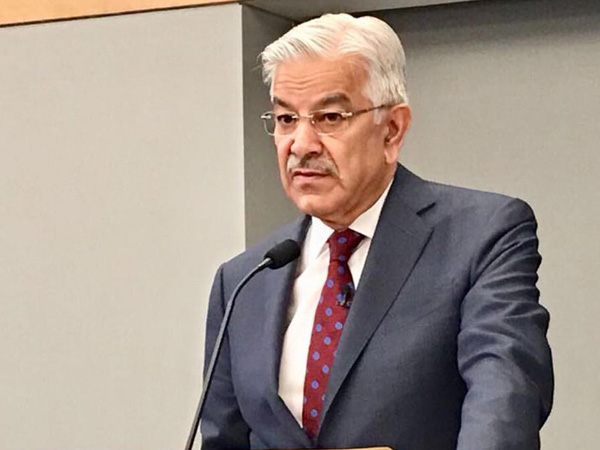 Minister for Defence Khawaja Muhammad Asif on Friday said the state would have to ensure that no one could violate the Constitution and the state institutions’ integrity as was the case with Pakistan Tehreek-e-Insaf Chief Imran Khan and others who were going to any extreme for personal political gains. Addressing to a joint media briefing flanked by Federal Minister for Planning Ahsan Iqbal, Minister of State for Petroleum Musadik Malik, Federal Minister for information and broadcasting Marriyum Aurangzeb among others, the minister hit back at PPP leader Aitzaz Ahsan over his controversial remarks against PML-N leaders in which he claimed that the recent acquittal of the Sharif family members, including Prime Minister Shehbaz Sharif, was a result of a deal with the establishment. Asif said PML-N leaders Maryam Nawaz, Hamza Shehbaz and the prime minister were acquitted by the courts on merit, not due to any “deal”. He said the PML-N leaders have always respected the Constitution and courts and the recent court verdicts have proven their innocence. “We have proved from our words and actions that we don’t want to violate the Constitution and the verdicts have been announced by the courts on merit,” he added. The defence minister further said the PPP leader’s allegations were a reflection of “his frustration and personal temptation”. “Nawaz Sharif and Maryam Nawaz appeared before JITs [joint investigation teams] hundreds of times… We have always demonstrated respect for the judiciary.”

In addition, he also slammed Imran for criticising the head of an institution “for the sake of gaining political fame and admiration among his supporters. Commenting on the efforts of the prime minister in trying to build a soft image of Pakistan among his counterparts, the minister said that in the past three to four months the former held meetings with over forty Head of the States that “helped in improving the image of the country among the comity of nations which was effected due to the” arrogance of Imran Khan in the past.” “Prime Minister Shehbaz Sharif held repeated three to four meetings with many Head of States that left positive and propitious impacts. It helped in repairing our relationship with our brotherly and neighbouring countries, including Gulf States, Central Asia States, China, Russia, USA and UK.”

He said the PM attended the UNGA meeting, some three to four regional conferences held in Central Asian states and recently attended the Conference on Interaction and Confidence-Building Measures (CICA) in Kazakhstan and held meetings with all the Head of the States there, also adding that more successful visits were underway. The acquittals of Maryam Nawaz, Shehbaz Sharif, Hamza Shehbaz and of course of Mian Nawaz Sharif were questioned by many, he said, adding, “I would like to clarify that the entire process of court hearings had proved that Pakistan Muslim League-Nawaz (PML-N) is keeping the constitution sacred and abiding by the law of the land.”

He added the entire PML(N) leadership faced detentions while passing through the entire process but “did not face humiliation like Imran Khan was witnessing.” Commenting on former Pakistan People’s Party leader Barrister Aitzaz Ahsan’s statement, he said Nawaz Sharif had appeared in some 200 court hearings and as many as by Maryam Nawaz case which showed the PML-N had demonstrated its respect and honour for judiciary and institutions. “The acquittal of our leadership including Ahsan Iqbal is evident to the fact that we have emerged victorious before the nation,” he stated in a reference to his colleague’s[Ahsan Iqbal] acquittal in Narowal Sports City (NSC) case.

He added that sanctity of state institutions should be protected as it should never be the part of public discourse Responding to media queries, he said the security forces were rendering sacrifices for the defence of the motherland. “Some fifty-three martyrdoms in Pakistan Army had occurred since June, including seven officers from three-star and two-star generals. But the Chief Minister Khyber Pakhtunkhwa (KP), has the least interest to look into his province.” The minister said the coalition government had accepted it’s responsibility of governing the federal government and would perform it’s duties. He queried that Imran Khan had two provincial governments where millions of people were flood affected, but had the latter extended assistance to support the masses struck by this calamity?

The member countries on CICA moot and even the French President extended assistance to the flood victims and they confirmed to continue the flow of aid during this flood crisis. The minister said Prime Minister Shehbaz Sharif pleaded the case of the country to all Heads of the States without “any personal motive and self-projection as he had no tantrum issues like Imran Khan, ” he said. Responding to a query, he said the general elections would be held on time brushing aside all talks about snap polls.