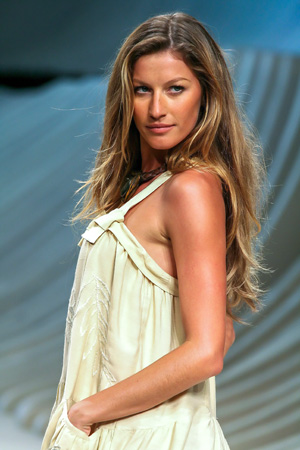 Gisele Bündchen’s recent social media move is raising eyebrows. Why? Because amid the rumours she and Tom Brady are heading towards a divorce, the supermodel shared a cryptic response to an Instagram post about relationships.

Author Jay Shetty shared a quote about relationships while promoting his upcoming book 8 Rules of Love on Instagram Oct. 11, which read, “You can’t be in a committed relationship with someone who is inconsistent with you. Read that again.” The On Purpose podcast host further reflected on what his quote means in the caption.

“Love is a daily effort,” Shetty wrote. “Some days it may come easier than others and that’s OK, but what should always stay consistent is the respect and admiration you have for your partner’s values and goals.”

Not only did Bündchen like the post but she also dropped a prayer hands emoji. And she wasn’t the only one to comment on the post. Bachelor Nation’s Susie Evans, who recently split from Clayton Echard, also left a series of heart emojis.

Bündchen’s Instagram activity comes a week after a source told E! News she and Brady have retained divorce attorneys.

“There has always been a lot of love and passion between them,” the insider shared on Oct. 4. “But now that they have been apart, it seems like this is better for everyone.”

And while neither Bündchen nor Brady have publicly commented on any split speculation, that hasn’t stopped fans from wondering if it could be game over for the couple.

Last month, Bündchen shared her thoughts on Brady continuing to play football after the athlete, who’s been in the NFL for more than two decades, announced his retirement and then returned to the sport earlier this year.

“Obviously, I have my concerns-this is a very violent sport, and I have my children and I would like him to be more present,” she told ELLE in an interview released Sept. 13. “I have definitely had those conversations with him over and over again. But ultimately, I feel that everybody has to make a decision that works for. He needs to follow his joy, too.”

As Bündchen noted to the publication, she has more dreams she’d like to pursue too.

“I’ve done my part, which is be there for,” she continued. “I moved to Boston, and I focused on creating a cocoon and a loving environment for my children to grow up in and to be there supporting him and his dreams. Seeing my children succeed and become the beautiful little humans that they are, seeing him succeed and being fulfilled in his career-it makes me happy. At this point in my life, I feel like I’ve done a good job on that.”

No matter what the future holds for the duo, they’ll tackle it. While Brady didn’t cite any specifics, he spoke about addressing life’s stresses during the Oct. 10 episode of SiriusXM’s podcast Let’s Go! With Tom Brady, Larry Fitzgerald and Jim Gray.