* A woman clapped for her while sitting on the road 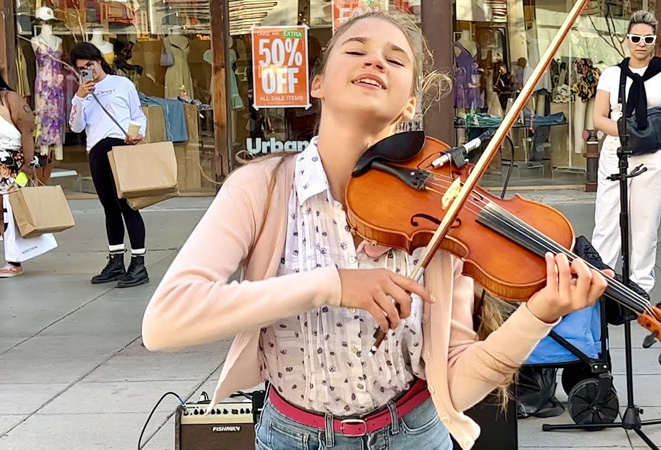 The viral video saw people cheering Karolina Protsenko on. They were making videos of her street performance in California.

A woman clapped for her while sitting on the road. A child wanted to join too. Her YouTube video has four million views and counting. In the description, she wrote that her rendition of the song inspired a cute little girl.

“Arab cute little girl was watching me playing ‘Pasoori’ on my violin and moving around,” she wrote. “She got inspired and wanted to join me. The next moment I see she copies my moves and dances around.

“It is a joy for me to see young little kids being inspired so much by my music.”

‘Pasoori’ is still the most listened-to and watched track of the 14th edition even after months of its release. Its popularity doesn’t seem to slow down and is getting a new rendition with each passing day not only in Pakistan but across the world.

A dance video of showbiz A-list actor Sonya Hussyn and her sister Sana grooving to the song by Ali Sethi and Shae Gill went viral across social media platforms. Moreover, Shehnaaz Gill came up with a take of her own.

Kriti Sanon shared a reel on her Instagram glimpsing the picturesque mountains of the region, while the Pakistani track played in the background.

Shilpa Shetty, Bhumi Pednekar, Arjun Kapoor and Rhea Chakraborty had joined the ‘Pasoori’ club earlier, while, the Dutch singer Emma Heesters dropped her rendition for the viral track as well.

It is pertinent to mention that ‘Pasoori’ was one of the soundtracks of the critically acclaimed Marvel Cinematic Universe web series ‘Ms Marvel’.