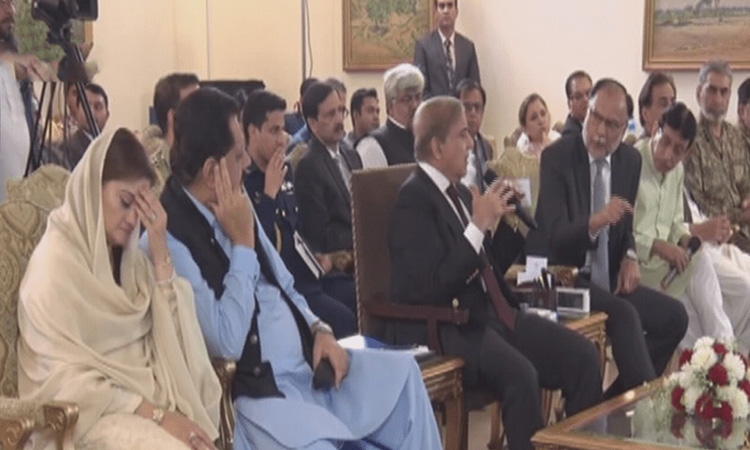 Several senior minister and government officials were left red-faced on Monday as Prime Minister Shehbaz Sharif refused to launch a substandard dashboard built to monitor flood relief assistance, pointing out that it lacked real-time updates and was not of international standards.

The prime minister rebuked federal ministers Ahsan Iqbal, Aminul Haque, Marriyum Aurangzeb and Tariq Bashir Cheema as he refused to inaugurate the event and remained seated. “If real-time information doesn’t arrive in this then it’s of no use. Then we are wasting each other’s time. I’m not going to inaugurate this today,” he said when informed that data from the meteorological department was not yet integrated with the dashboard, a private TV channel reported. “This should be trashed,” he said, calling it a “joke”. “I’m not negating your effort but this is not the dashboard we all imagined. This is a stationary thing in which you fill in figures.”

Ahsan Iqbal tried to placate the prime minister by reasoning that the information on the portal could not be displayed in real time because it was dependent on information from the provincial disaster management authorities. However, Shehbaz cut the minister midway, “but sir […] you will find out who is providing the information and who is not […] at best, this can be called a static dashboard.”

“But still, dashboards are a work in progress […],” Iqbal, once again, tried to pacify the prime minister. “They have developed a tool in a short time but as we go on more data will be uploaded.” But Shehbaz was adamant that the dashboard couldn’t meet international standards and failed to show the colossal damage suffered during the floods.

“This (flood dashboard) is not something the nation or I want. It lacks in many ways [and] it is deficient to our requirement,” the prime minister said as he reprimanded the officials concerned. He also complained that the dashboard was not fast enough, adding that a lagging portal would not reflect the loss suffered due to the floods as well as the government’s efforts to mitigate their fallout.

The prime minister said that with upcoming international conventions and moots on the horizon, he wanted the dashboard to be of a certain standard and in line with modern expectations. Here, Haque assured the PM that all his instructions had been noted. “We will try to modify this [the dashboard] and make it better. I request you to inaugurate it today and we will make it better,” he said. The IT minister also went up to the stage to talk during the official briefing ceremony.

Subsequently, Shehbaz suggested that the project could be “provisionally” launched but officially launched next Monday after incorporating his suggestions and criticisms. The prime minister was assured by the officials that they would resolve the issues he had outlined and convert the dashboard into a real-time platform in a week’s span.

Shehbaz told the two federal ministers to take all the help they needed but develop a “world-class” dashboard, adding that it would aid the government for decades to come and any “makeshift” work would be of no benefit.

Earlier, Briefing the meeting, Chairman of the National Disaster Management Authority Lt General Akhtar Nawaz said currently around 80,000 more tents were required in the flood-hit areas. He said the embassies of some countries, including China, Turkey and others, had indicated for arranging tents from the local market. He said as per a survey, the flood-hit people had prioritized food over health and shelter which necessitated measures to arrange food for the flood survivors.

Chairman of the National Flood Response Coordination Centre Major General Zafar Iqbal said flood was water stagnant in two districts of Balochistan. He said since August 31, 70% water situation had improved and that it would take another two to three weeks to recede water.

Chairman of the National Highway Authority Khurram Agha told the meeting that the flood-hit communication network had been restored. He said during the rehabilitation process, the NHA was prioritizing the routes of key importance, particularly those connecting the provinces.