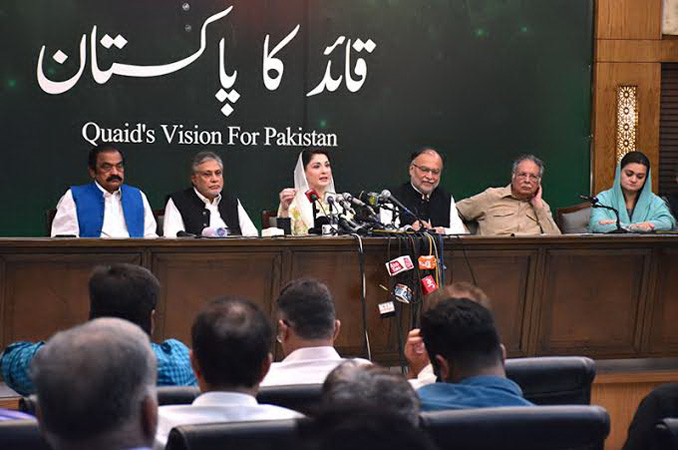 PML-N Vice President Maryam Nawaz on Saturday said that former prime minister Imran Khan’s Bani Gala residence should be raided to recover the “missing” copy of a diplomatic cypher that carries the details of the purported “foreign conspiracy” against his now fallen government. She was addressing a press conference in Lahore, while Federal Finance Minister Ishaq Dar, Federal Interior Minister Rana Sanaullah Khan, Federal Minister for Planning and Development Ahsan Iqbal, Federal Law Minister Azam Nazir Tarar, Federal Minister for Information and Broadcasting Marriyum Auranzeb and Pervez Rashid also accompanied her. Maryam Nawaz said though she did not want to utter Imran Khan’s name, she had to expose his real face and lies before people, adding that many audios had earlier come forth against PML-N’s leadership, but there was no such audio in which the PML-N leaders had ever talked against Pakistan. Of course, she said, there had been a conspiracy against Pakistan, and it was not by the PML-N, PPP or any other party of the PDM (Pakistan Democratic Movement), the establishment and any foreign power, but by the Pakistan Tehreek-e-Insaf. PTI leaders — Shah Mehmood Qureshi and Asad Umar, and Azam Khan, the then prime minister’s principal secretary, were involved in the cipher conspiracy, she added.

During the Nawaz Sharif’s tenure, she recalled, there had been discussions and policy formulations for development of the country and people’s prosperity in the Prime Minister’s House, but Imran Khan, while sitting in the PM House, hatched a conspiracy against the country.

The PML-N vice president said that the PTI leaders also tampered with the national record. She alleged that the party had a mindset which wanted to destabilise the country. In the cipher audio-leak, Imran Khan says: “We have to play on it”, which showed the mindset of Imran Khan. Today, no Pak diplomat in any country was ready to send ciphers to Pakistan, she regretted, demanding that Imran Khan must tender apology to the Pakistani nation. Maryam hoped that now the youth of Pakistan would ask Imran Khan about cipher and other such audios, asserting that on one hand, Imran Khan had instigated the public against America while on the other hand he, during indoor meetings, said that no one should name any country.

Pakistan saw many elected prime ministers and dictators but none of them had been blamed as traitor and this ignominy came only in Imran Khan’s credit. Referring to Nawaz Sharif, she said that the person, who remained prime minister thrice, also had many secrets of the country and he also had faced severe threats as well as US $ 05 billion offer when Pakistan had been going for nuclear explosions, and despite all odds, he never compromised on Pakistan security and sovereignty, and that was the real ‘Absolutely Not’. In his conspiracy under lust for power, Imran Khan did not spare even the army martyrs and launched a malicious campaign against the national institutions, she said and added that Imran Khan said that Mr. xyz had conspired against him but the time had proved that he himself was Mr. xyz, Mir Jafar and Mir Sadiq. She said that she was complained of her government that Imran Khan breached the Constitution and brought bad name to Pakistan was still free and had yet not been taken to task. She suggested the government to raid Imran Khan’s house in Bani Gala and recover the cipher and other secret official documents, which were stolen from the PM House.

Earlier, Ishaq Dar told media that the cipher was disappeared from the PM House, and when the former PM’s Principal Secretary Azam Khan was asked about it, he said that he had handed that cipher over to the then PM Imran Khan. He said that it was a serious breach of Official Secret Act on the part of Imran Khan. He said that Imran Khan was a great conspirator having agenda of destabilising and defaming Pakistan, citing that earlier he had jeopardised the country’s economy due to this Pakistan would economically be placed at 54th in the global ranking. He mentioned that during PML-N government, there was two and four per cent food and general inflation respectively and the country’s economy was growing at 5.3 to 6 per cent.

Dar said that PDM government had somehow overcome the damages to economy inflicted by PTI during its four years in government, citing that during last five-day, rupee value against US had been positive and rupee was getting stable and this trend would continue in days to come as well. This trend, he said, had so far led to automatic reduction of foreign debts up to Rs 1400 billion. The cipher episode proved that conspiracy was not being done by the then opposition but by the PTI government, and ‘we would fail in our national, sovereign, security and constitutional duties, if we set aside this serious matter under political considerations.’