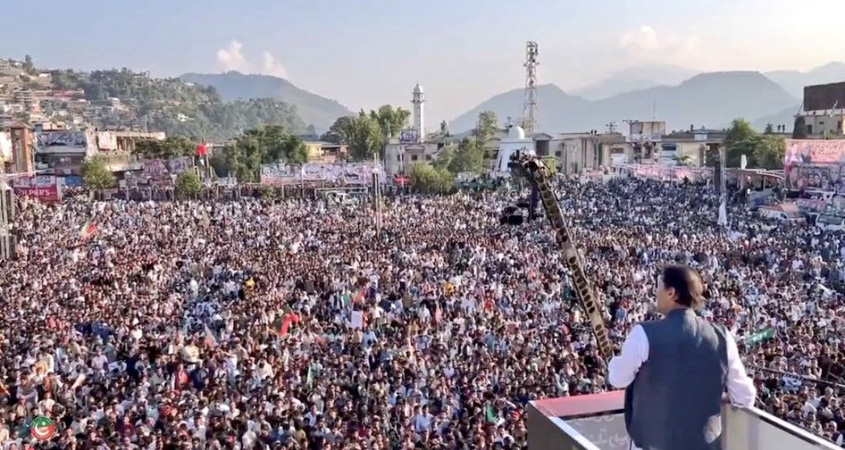 Addressing a massive rally at the Muzaffarabad Cricket Ground in Azad Jammu and Kashmir (AJK), Imran Khan said that the recent audio leaks had proved that the Sikandar had ‘fixed the [electoral] match’ in collaboration with the Pakistan Muslim League-Nawaz (PML-N). “I will leave no stone unturned in sending him to jail,” Imran said, warning that his party would take all possible legal steps against the electoral chief. He went on to call the Sikandar the ‘chief electoral fraud’.

Reiterating his movement to attain true independence, Imran urged the Kashmiri youth to join his movement. He claimed that the federal government led by the Pakistan Democratic Movement (PDM) coalition had cut the budget for the disputed territory.

“I am preparing myself, so when I call you, be prepared for a real freedom movement,” he said. Talking about the return of Federal Finance Minister Shaq Dar after a five-year exile, the former prime minister claimed that Dar was one of the key individuals involved in helping Nawaz Sharif launder money. He added that Dar had cut a deal to return in a new National Reconciliation Ordinance (NRO). Imran added that if people like Dar can come back after cutting a deal, why are our prisons full of the poor for petty crimes, adding that inmates should all be let go after cutting a deal.

He said that God also says that people should not take a neutral position, either you are with good or with evil. “Prepare yourself and wait for my call,” he repeated.

Talking about the audio leaks, Imran Khan thanked Shehbaz for leaking the audio of his conversation with his then principal secretary Azam Khan.

“I want to thank Prime Minister Shehbaz Sharif,” he said, adding that it was due to the leak that people now believe that the diplomatic cypher allegedly pointing to a conspiracy to bring down his government was real.

The PTI chairman said Donald Lu threatened Pakistan’s former ambassador to the US, Asad Majeed, that a failure to remove Imran through a no-confidence vote would herald “consequences” for Pakistan and vice versa.

Imran also alleges that the threat was made even before the no-confidence motion was tabled and that it subsequently started a chain of events that resulted in his ouster as local abettors and conspirators joined in the claimed conspiracy.