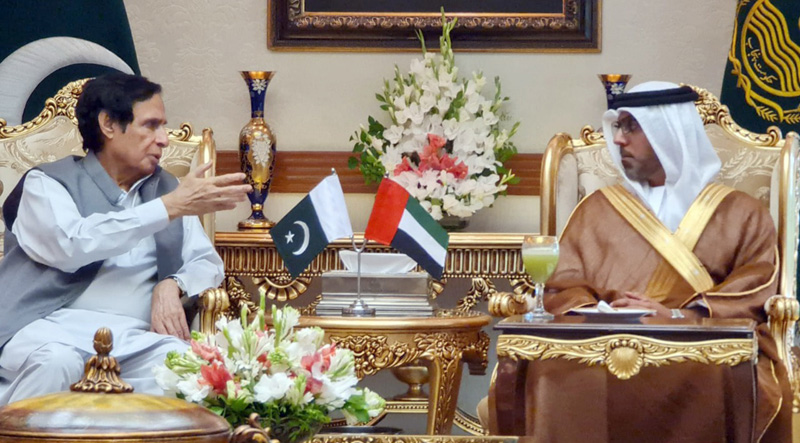 They also discussed bolstering bilateral relations and investment opportunities as it was agreed to start work on Mubarak Center on Ferozepur Road in Lahore soon.

He said, “We welcome the Dhabi Group’s investment in Mubarak Center and are deeply grateful to Sheikh Nahyan bin Mubarak Al Nahyan, Minister of the United Arab Emirates.” The project also included a 7-star hotel, which would accommodate international players, he noted and added that the Mubarak Center and Gaddafi Stadium would be linked. The plan would greatly facilitate international players to come and go to Gaddafi Stadium. During the tournaments, traffic jams would be relieved and traffic will continue to flow, he further said.

Parvez Elahi mentioned that the government would speed up this project and this avant-garde project would increase commercial and economic activities. He said Pakistan and the United Arab Emirates enjoyed brotherly relations, and asked the UAE investors to take advantage of the immense opportunities for investment in Punjab.

The UAE ambassador invited Parvez Elahi to visit the United Arab Emirates and added that the Mubarak Center would further promote cooperation between the two countries. “Pakistan is our second home. It is our duty to help the flood victims in their hour of difficulty and we are present to help our Pakistani brothers.

Addressing the ceremony, the CM said that the provincial government would create a foolproof driving licensing system and this license would be useful abroad as well while traffic accidents will be reduced by 50% if the licensing system was in a proper manner.

After Pakistan armed forces, only Rescue 1122 was seen in floods and Rescue 1122 did immense work in flood-affected areas, he maintained. Foreign ambassadors had also praised the rescue emergency service of Punjab, he added.

No other organization was awarded by the United Nations except Punjab Rescue, he noted.

He said that the case of risk allowance for the employees had been approved. During Covid-19, Rescue 1122 gave an exemplary response and buried unattended bodies. He said that this was the best institution, not only in Pakistan but also in South Asia. He congratulated Director General of Punjab Emergency Service, Dr Rizwan Naseer for promoting merit in the organization.

The CM inspected the life-saving equipment and gave the keys to the emergency officers of Nankana Sahib, Sheikhupura and other districts. He also sent teams of rescue motorbike services to the districts.

Inspector General Police Faisal Shahkar and others attended the event.

The Punjab government stands with the bereaved family and will take full care of them, he concluded.

Meanwhile, Chief Minister Punjab Chaudhry Parvez Elahi expressed his deep sense of sorrow over the death of the mother of Ijaz-ul-Haq Chief Executive Officer Express Publications. CM expressed his heartfelt sympathy and condolence with Ijaz-ul-Haq and with the bereaved family. CM in his condolence message stated that he was deeply grieved over the death of Ijaz-ul-Haq’s mother and the grief of the separation of a mother cannot be expressed in words. CM prayed that may Allah Almighty rest the departed soul in eternal peace and grant fortitude to the bereaved family.