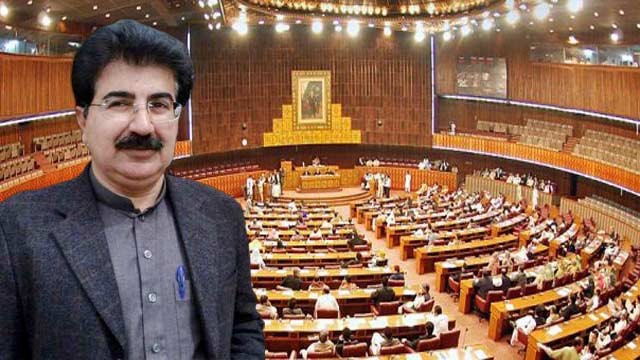 The committee established to consider the newly presented revisions to the Transgender Persons (Protection of Rights) Act, according to Senate Chairman Sadiq Sanjrani, will appropriately engage religious scholars and the Council of Islamic Ideology if needed.

“The Senate will never do anything against the Islamic laws,” Sanjrani said.

Senator Mushtaq Ahmed has filed the amendments to the Act which are currently being weighed by the Senate committee.

Strongly advising against unnecessarily politicising the issue, he stressed that in case of any controversy, the government was determined to follow the consultation’s course.

Regarding PML-N leader Ishaq Dar’s return, Senator Sanjrani said he had not contacted him yet. “Dar can come and take the oath, we have no objection to it,” he stated.

The Transgender Persons (Protection of Rights) Act was passed by Pakistan’s Parliament in 2018. The law prohibits discrimination against transgender people in schools, workplaces and public spaces, as well as ensures their right to vote, inherit property and run for public office.

Politicians from religious political parties, including Jamaat-e-Islami and Jamiat Ulema-e-Islam Pakistan, sparked controversy this year by arguing that the law is incompatible with Islamic principles and has to be changed right away.

Social media users and conservative politicians accuse the law of permitting gender-reassignment surgeries, same-sex marriages, and cross-dressing. They also claim that since 2018, when the law was passed, over 23,000 people have changed their genders.

The claim that the law will allow men to change their gender to female and female to men on official documents is incorrect.

The law clearly defines a “transgender person” as one who is “intersex” with a mixture of male and female genital features or a eunuch assigned the male gender at birth but undergoes castration or a trans person whose gender identity differs from the sex they were assigned at birth.

The Rules to the Act further clarify that a transgender person will have to approach the National Database and Registration Authority (NADRA) for a change of name or gender on identity documents, as per their self-perceived identity. And NADRA will only alter their gender from Female to the category “X” or Male to the category “X”.

“X” symbolises the third sex in Pakistan, a classification specially created for the trans community on the orders of the Supreme Court in 2009.

The law or the Rules do not allow men to change their gender to female or vice versa on their CNICs, passports or other travel documents.