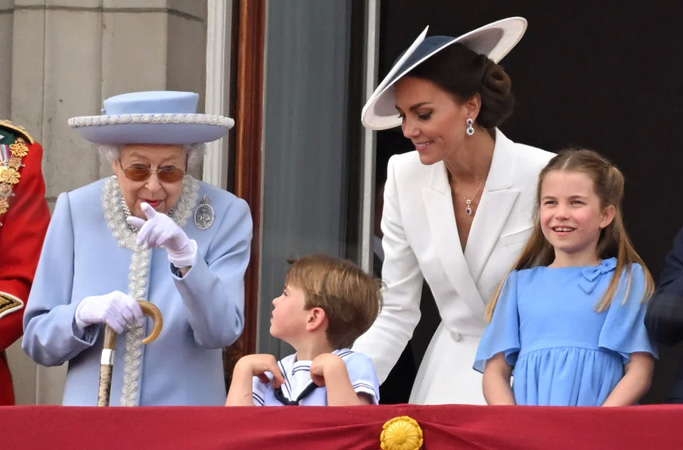 At age 4, Prince Louis brought to mind a beautiful and heartbreaking scene following the loss of Queen Elizabeth.

While greeting supporters of the late monarch at Windsor Castle on Sept. 10, the boy’s mother Kate Middleton, the new Princess of Wales (formerly Duchess of Cambridge), relayed her youngest son’s words to her about his paternal great-grandmother.

One well-wisher, Banita Ranow, said Kate told a group of children, “Louis said at least Grannie is with great grandpa now,” the Sunday Times reported. Banita said the princess was “welling up” as she spoke, according to the outlet. Footage of that moment has since made its way to social media after Nicole Gumienny captured Kate’s moving words on camera.

At Windsor Castle, Kate was accompanied by husband and now-heir to the throne, Prince William, with whom she also shares children Princess Charlotte, 7, and Prince George, 9, who, according to a 2016 ITV documentary interview with the princess, called the monarch “Gan-Gan” when he was a toddler. The Prince and Princess of Wales were joined by William’s brother Prince Harry and his wife Meghan Markle, who were photographed with the couple for the first time in more than two years amid reported tensions between the families, fueled by the latter pair’s 2020 royal exit.

The Waleses and the Duke and Duchess of Sussex barely interacted. They walked together, with the brothers in the middle, as they made their way to the gates, where they observed fans’ flowers and other gifts, and then split up to greet the well-wishers.

Regardless, their unexpected show of unity touched the hearts of many mourners. “I felt so emotional and I felt the queen would have loved it,” said Banita’s mother, Baljinder Ranow, according to The Sunday Times. “I just hope in the future they remain like that and that the brothers come together, and the families.”

The couples’ reunion took place hours after William joined the men’s father King Charles III at his accession ceremony in London and soon after the new Prince of Wales penned his own personal tribute to his “Grannie” the queen, which followed his dad’s own social media homage and televised speech following her death.

In an Instagram post, William recalled how his and Kate’s children got to spend holidays with his grandmother and “create memories that will last their whole lives.”

William, whose mother Princess Diana, the former Princess of Wales, died in 1997, added, “She was by my side at my happiest moments. And she was by my side during the saddest days of my life. I knew this day would come, but it will be some time before the reality of life without Grannie will truly feel real.”