With World Cup in mind, Pakistan clash with England in first T20I at NSK today 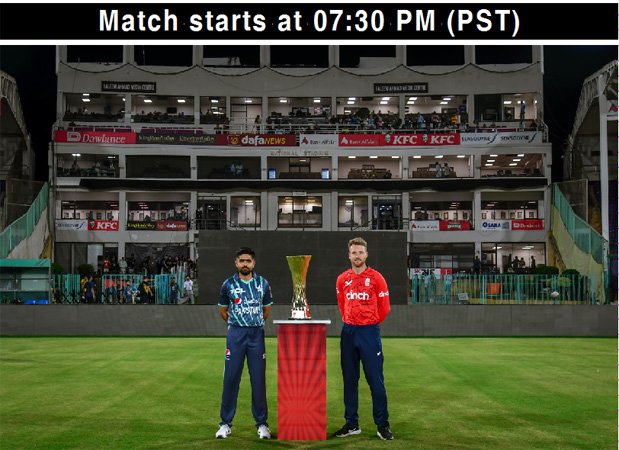 KARACHI: With the Twenty20 World Cup 2022 on their minds, Pakistan, led by Babar Azam, will take on visiting England in the first Twenty20 international of a seven-match series at National Stadium Karachi here on Tuesday (today). England are touring Pakistan after 17 years, a lengthy absence brought about by security fears. England last played in Pakistan in 2005 and were due to visit in 2021 until pulling out at short notice after New Zealand also cancelled a tour citing safety concerns. Skipper Jos Buttler and his charges were only given the green light to tour Pakistan after a security team evaluated the situation on the ground. The series has assumed even more importance for both sides ahead of the World Cup to be held in Australia next month. England will play four matches in Karachi and three in Lahore before returning in December to play three Tests in the second leg of the tour. The long-awaited return of England comes five months after a trouble-free tour by Australia, their first in 24 years, which helped Pakistan’s rehabilitation as a safe place to play cricket. International cricket has gradually returned to Pakistan following years where they were forced to play home matches in neutral venues after a deadly attack on the Sri Lanka team bus in 2009.

It is interesting to note that at least 10 members of the current squad have some experience of local conditions courtesy of their Pakistan Super League (PSL) stints. One of them, Alex Hales, will be particularly keen to impress after his three-year absence from international cricket due to an off-field issue. The PSL is a popular product in its own right, widely regarded as the second-best short-form league in the world behind the Indian Premier League (IPL), but has also acted as a diplomatic vehicle to bring leading players — from England and elsewhere — back to Pakistan. As a result, boards can no longer hide behind claims that their players are unwilling to travel.

With Buttler set to miss the Karachi leg as he recovers from a knee injury, the side will be led by all-rounder Moeen Ali, whose grandfather came to England from Pakistan after the World War II. Moeen told media that captaining England against Pakistan — where his family have roots — was a “huge and proud moment”. Birmingham-born Moeen has captained England in T20s before but said leading the side on this tour was special.

“Obviously with my roots being from here and to lead England in such a big series, a historic series is a huge and proud moment. My mum and dad, my friends and my family and community and everybody who I feel I represent is happy for me,” he added. “Leading and playing for England anywhere and in any game is a huge honour.” Moeen’s grandfather was from Mirpur in Pakistan-administered Kashmir, and he spent some years of his childhood there. There are fears Buttler will miss the Pakistan series entirely, after suffering an injury during The Hundred tournament last month. “I am not sure when Buttler will play, he is a bit more careful and maybe at the back end of the tour he will play one or two games but it will depend on his progress,” Moeen said. “We want him fully fit for the World Cup so we will not risk anything.” England are also without Liam Livingstone and Chris Jordan as they recover from ankle and finger injuries respectively. Test captain Ben Stokes has been rested ahead of the T20 World Cup. Moeen said despite the absences, England’s young side should be not underestimated, describing it as “a very good white-ball side”. The series will conclude on October 2. The tourists are looking to bounce back from recent Twenty20 series defeats to the West Indies (3-2), South Africa and India (both 2-1).

On the other hand, Pakistan will look to shrug off the disappointment of losing to Sri Lanka in the Asia Cup final earlier this month. Skipper Babar Azam’s slump in form, and their overall batting approach in 20-overs cricket, have been major talking points and Pakistan will look to iron out the kinks during the course of the series. Babar told media on Monday that he hoped the seven-match series against England would help him return to his best scoring form, after a lean Asia Cup earlier this month. The 27-year-old managed just 68 runs in six games in the United Arab Emirates, where Pakistan finished runners-up to Sri Lanka. “I hope to return to my best in this series. and it will be good if it happens before the World Cup,” Babar said.

Babar, who is Pakistan’s top T20I run-getter with 2,754 runs in 80 games, said he keeps things simple while batting. “I think less about failures when going through a bad patch. As a batsman your focus is to do your best to regain your form and it would be great to do that before the World Cup.” Babar said the England series was a “big occasion”. “Obviously they have come to Pakistan after 17 years so it’s a big series and will help us build us towards the World Cup so all the players will utilise this,” he concluded. The Pakistan Cricket Board (PCB) has already announced gate earnings from today’s T20I will be donated to the PM’s Flood Relief Fund. Furthermore, and to mark the occasion, the Pakistan team will wear special limited edition commemorative shirts in which one-third of player names and numbers will be submerged. This reflects the present situation in Pakistan as one-third of the country is underwater following monsoon rains and floods, which have left more than 1,500 dead and over 1.5million homeless.