Five things to know about the queen’s coffin procession 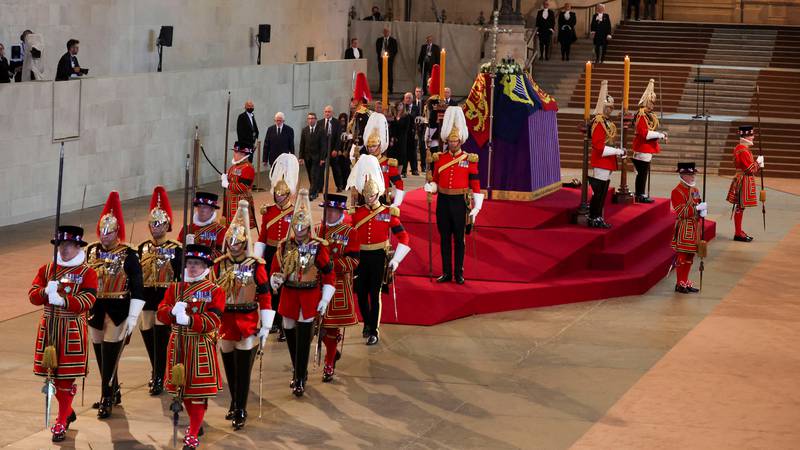 The ceremonial processions taking Queen Elizabeth II’s coffin to London’s Westminster Abbey and then towards her burial place at Windsor reflect the ancient traditions of the British monarchy. Five things to know about the queen’s coffin procession:

Hauled by the Royal Navy

Royal Navy sailors will use ropes to pull the queen’s lead-lined coffin mounted on a gun carriage from Westminster Hall to Westminster Abbey. Their comrades in a team of 142 sailors will walk alongside to act as a brake if necessary.

This tradition dates back to Queen Victoria’s funeral in February 1901.

The horses meant to haul the gun carriage weighing more than two tons panicked and began kicking, threatening to drop the coffin.

One of the queen’s relatives, Prince Louis of Battenberg, a Royal Navy captain, suggested to the new king, Edward VII, that this problem could be avoided by replacing horses with sailors.

Nine years later when Edward VII himself died, this idea was put into practice again and it has since become an unchanging tradition at state funerals.

Eight soldiers from the 1st Battalion Grenadier Guards will have the task of carrying the queen’s coffin from Westminster Hall to the gun carriage outside, and then into Westminster Abbey.

One of the most ancient in the British army, the regiment is among five infantry regiments that make up the Queen’s (now King’s) Life Guard.

The regiment’s soldiers normally wear tall bearskin hats, a uniform they copied from the grenadiers of Napoleon’s Imperial Guard, defeated at Waterloo in 1815.

The soldiers will be accompanied by Service Equerries to the Queen, attendants who assist the royals in carrying out public duties.

Three regiments will play a particularly important role in the procession, marching very close to the queen’s coffin.

The Yeomen of the Guard, the oldest military unit in the British Army created in 1485, and the Honourable Corps of Gentlemen at Arms are two former bodyguard units for the royals that now perform only a ceremonial role.

The Yeomen of the Guard always wear a red-and-gold uniform dating back to the Tudor era (16th century).

One of their best-known activities is searching the Palace of Westminster for gunpowder before the State Opening of Parliament.

This annual ritual commemorates the Gunpowder Plot, a failed attempt led by Guy Fawkes to blow up King James I and parliament in 1605.

They will be followed by members of the Royal Company of Archers, who acted as bodyguards for Elizabeth II whenever she was in Scotland.

Some detachments from other regiments in Britain and from the armed forces of the Commonwealth, a group of countries headed by the British monarch, will rejoin the funeral procession from Westminster Abbey to Wellington Arch at Hyde Park Corner near Buckingham Palace.

In front of them will come the pipers and drummers of the Scottish and Irish regiments, and the Brigade of Gurkhas made up of soldiers from Nepal who are part of the armed forces. There will also be 200 Royal Air Force musicians.

Around 6,000 soldiers, sailors and aircrew from the British armed forces will take part in the procession, Chief of the Defence Staff Admiral Tony Radakin told the BBC on Sunday.

At several points along the route, they will perform a royal salute, for example when they pass the Victoria Memorial commemorating the queen.

“For all of us, this is our last duty for Her Majesty the Queen and it’s our first prominent duty for His Majesty King Charles,” he said.